Call for greater recognition of George Stokes’s contribution to science 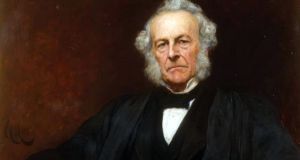 George Gabriel Stokes made profound contributions to hydrodynamics and devised and performed many ingenious experiments in optical science. Portrait: The Royal Society

Ireland should do much more to recognise “the immense contribution to the world of science” made by mathematician and physicist George Gabriel Stokes who was born 200 years ago today – August 13th – in Skreen, Co Sligo.

Unquestionably, Stokes is the forgotten figure in the pantheon of Irish-born scientists that includes John Tyndall, William Rowan Hamilton and Ernest Walton, according to emeritus professor at UCD school of mathematics and statistics Peter Lynch.

“Hamilton and Stokes are way ahead of the others, in my view,” added Prof Lynch, who is a well-known maths blogger, meteorologist and Irish Times columnist.

Stokes made profound contributions to hydrodynamics and devised and performed many ingenious experiments in optical science while giving brilliant theoretical explanations of results, he said.

His work in optical science provided evidence in support of the wave-like nature of light. He discovered how oxygen is transported in the bloodstream. At the heart of every climate change model lie equations Stokes developed with Claude-Louis Navier. The same models are used regularly for short- and medium-range weather forecasts.

Stokes was educated in Ireland and Bristol before going to the University of Cambridge where he was based for many decades. Any doubt about his Irishness was eradicated by his regular visits on summer vacation to Co Sligo.

Moreover, he helped the renowned Irish instrument-maker Howard Grubb to construct achromatic lenses for his famous telescopes, and he visited Birr to advise the third earl of Rosse on the construction of his giant telescope, completed in 1845.

The lack of recognition of Stokes was due to the fact that “nobody owns him in the way Trinity College owns Hamilton”, Prof Lynch has said. A good place to begin might be Sligo Institute of Technology, he suggested.

Stokes was a close colleague of another giant of Victorian science, Belfast-born William Thomson, later Lord Kelvin, who noted that in his scientific work and thought “Stokes ranged over the whole domain of natural knowledge”, backed by his “powerful and unerring mathematics”.