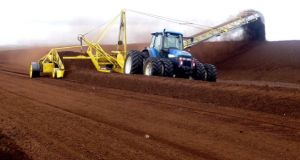 Willie Noone of SIPTU said the workers saw what was coming as a consequence of climate change but the problem was that ‘this has been fast-tracked’. File photograph: Pat Sammon

Bord na Móna workers employed on bogs in the Midlands “are being treated abysmally” as their employer seeks to get out of peat production, a union representative has told the Oireachtas Committee on Climate Action.

Willie Noone of SIPTU said the workers saw what was coming as a consequence of climate change but the problem was that “this has been fast-tracked”.

Voluntary parting packages were clearly inadequate, especially for those over 62 years of age, he added. “That is not a just transition.”

While the company had come up with alternative projects that would provide employment, the majority of skills sets within the workforce would not be required, said Mr Noone, who was part of an Irish Congress of Trade Unions delegation who appeared before the committee on Tuesday.

International development officer with ICTU David Joyce said it was proven throughout the world that “social dialogue, with close coordination between government, state agencies, employers and trade unions” was needed to ensure a just transition away from fossil fuels.

In the Australian town of Port Augusta, unions had worked with local businesses and citizens to develop their own just transition plan, in advance of the 2016 closure of the town’s coal-fired power station.

“Their research found a solar thermal plant was the best option to enable a smooth skill transfer and to ensure a long term clean energy solution. The new solar plant will create 1,800 jobs and save 5 million tonnes of greenhouse gas emissions. But it will also help the wider community reap the benefits of a zero carbon future,” he told the committee.

The unions under ICTU’s Energy & Natural Resources’ Sector Group represent tens of thousands of workers in the energy production and distribution sector, he added; “all of whom are directly affected by climate change”.

For Bord Na Móna workers, they were facing “the loss of 150 jobs before Easter 2019 and up to 850 redundancies in the peat harvesting business by 2025”.

Director of the Nevin Institute Tom Healy said a just transition was inevitably difficult and painful, “with some regions disproportionately affected in the short-term”. It required innovation and imagination in terms of investment and alternative employment, he believed.

Meanwhile Minister for Climate Action Richard Bruton has outlined mitigation and adaptation policy measures adopted across government to reduce emissions of greenhouse gases and to adapt to the effects of climate change in an annual statement required under the 2015 Climate Action and Low Carbon Development Act.

“This information will be important as we develop our all of government plan to make Ireland a leader in responding to climate change. While there is much to commend in the past year in terms of progress, we need to do more if we are to achieve our targets. I will be working with colleagues across all sectors to step up our response,” he said.

The Minister confirmed the plan would be published early in the New Year and outlined key measures in decarbonisation including substantial investment in the National Development Plan, the Climate Action Fund and green financing.

On agriculture, he said Teagasc had produced a key report on the opportunities for cost-effective emissions reduction from the sector with the potential to reduce agricultural emissions by 18.5 million tonnes.

Building regulations were being amended to ensure all new houses would have to meet the net zero energy requirements while the Government was strengthening the public spending code to ensure carbon impacts were fully reflected when costing any public project.

Published for the first time were updates on the implementation of the National Mitigation Plan, notably on reducing emissions in electricity generation, the built environment, transport and agriculture, forestry and land use – and on National Adaptation Framework on climate change.

Dublin City Council has agreed a new climate action plan for the city. Produced by a sub committee led by Green Party Cllrs Claire Byrne and Ciarán Cuffe, in consultation with Codema energy agency and the council. It will be published in January and subjected to public consultation.

Cllr Byrne said the previous plan had not been updated since 2009 “and now, almost 10 years later, we are in an even more precarious place in terms of the impacts of climate change on a local level”.

The plan would help tackle emissions caused directly and indirectly from the council, including street lighting; council buildings, and fleet management, as well as council-owned housing, Cllr Cuffe said.

“However, this covers less than 5 per cent of the emissions in the Council’s operational area. The real challenge therefore is for Minister Bruton to tackle the 95 per cent of emissions that are not under the direct control of the Council. We await his detailed plans in this regard,” he said.