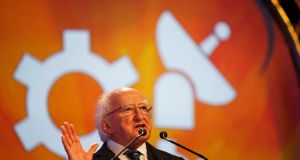 Young people, especially those who engage in scientific endeavour, are “a source of great hope for the creation of a better world”, according to President Michael D Higgins.

“We need the engagement of young citizens who have remained curious, constantly seeking solutions to open questions they have insisted on keeping open,” the President said on Wednesday, as he officially opened the 2019 BT Young Scientist and Technology Exhibition in the RDS.

“On your efforts, among others, we are reliant for the creation of that better world, a world that must be changed from its present destructive tendencies,” he added.

“Just think of it. A planet four or five billion years old put at risk by policies that are only 250 years old. This is why we must change and we can change.”

He said that, looking at the projects on show at this year’s exhibition, he was “ever more convinced we have many young people in this country who promise to become the problem-solvers, critical thinkers, and persistent learners that are so essential to the crafting of a shared and better future for all who share this fragile planet”.

The Earth was, however, at a point of emergent crisis, he believed, “a crisis we cannot afford to ignore, not only for our own sakes but for the sake of the very existence of the planet itself”.

The world had missed many opportunities to utilise shared knowledge, he said. “We have paid such a high ecological price for this. That is why the best use of your achievements will come when they are shared.”

He commended the Young Scientist exhibition for becoming more inclusive. “The projects put before us do not just address scientific issues in isolation but see them as living contemporary social issues . . . such as unconscious bias in research and in policy, the issues raised by recent cervical cancer screening, and the impact of social media.”

Although only 25 per cent of those working in STEM (science, technology, engineering and mathematics) industries in Ireland were women, 55 per cent of Young Scientist participants were female, the President noted.

While it was still a cause of concern that society was being denied the intellectual contribution of all, many of the obstacles that once stood between women and the pursuit of a scientific career had been removed, he observed.

While barriers remained, more and more women were now playing a leading role in scientific research and in industry.

In the same way a consciousness of ecological crisis had been built up, there was a need to develop an economic literacy among the public, “and a responsibility among theorists to declare the assumptions upon which policy is offered. We must resist the fallacy of false inevitabilities.”

This was required to achieve a balance between ecology, ethics, society and gender, he said.

Gendered social economics was “the future”, as reflected in the writings of economist Mariana Mazzucato and sociologist Sylvia Walby, Mr Higgins argued.

In relation to the Young Scientist exhibition, he singled out the parents, teachers and schools “whose efforts, year after year, enable the bringing together of this great display of scientific wonder”.