Government still not tackling climate change? So sue them 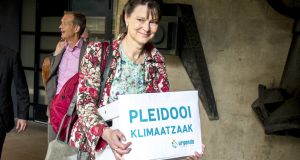 Marjan Minnesma, director of environmental group Urgenda, arrives at court in The Hague in May 2018 for the group’s case against the Dutch government. ,Photograph: Jerry Lampen/AFP/Getty Images

Climate action by way of litigation has become a key frontline action, with cases against governments and fossil fuel companies spiralling across the world.

The Irish Government is next in the dock, as an environmental group has claimed the national response is inadequate and contravenes the human rights of Irish citizens.

The case is due to commence on January 22nd and follows similar proceedings in the Netherlands.

Wins have been rare but such cases attract a lot of publicity and heap pressure on administrations and corporations – already on the back foot because of their inadequate responses up to now – notably on future commitments to reduce carbon emissions.

What has become known as Climate Case Ireland (CCI), is being brought in the High Court by Friends of the Irish Environment. The action is being crowdfunded; more than 9,000 people have supported its petition calling on the Government to pursue more ambitious and urgent climate actions. The State is fully defending its response to date.

It’s the first case in Ireland in which citizens are seeking to hold the Government accountable for its role in “knowingly contributing to dangerous levels of climate change”, according to CCI spokeswoman Sadhbh O’Neill. The case seeks to build on Friends of the Irish Environment’s previous legal success – winning recognition in 2017 of an unwritten right to environmental protection in the Constitution.

The court has already ruled as inadmissible the opinion of UN Special Rapporteur on Human Rights and the Environment Prof David Boyd, who found the Government’s failure to take more effective measures to address climate change “a breach of Ireland’s human rights obligations”.

But this does not prevent the plaintiffs raising human rights issues, O’Neill says. Climate Case Ireland asks the court “to quash and remit the inadequate 2017 National Mitigation Plan [NMP]in order that it can be remade to protect these fundamental human rights”.

Under the 2015 Climate Action Act, it claims the Government should not only take additional actions on an urgent basis to implement its current nationally determined contributions to reduce emissions, “but also to seek to strengthen that contribution as part of the collective effort to meet and/or exceed the targets set out in the Paris Agreement” on climate change.

Climate Case Ireland is asking the court “to quash and remit the inadequate 2017 NMP” so it can be “remade to protect these fundamental human rights”.

Ireland is already under international scrutiny for failure to reduce emissions but, critically, climate change poses real risks to a range of human rights, including violating the right to life, and the Government has a positive duty to protect these rights, O’Neill adds.

In the Netherlands, the case was brought by the NGO Urgenda on behalf of 900 Dutch citizens in 2012. In its latest victory last October, an appeals court upheld a ruling ordering the government to cut greenhouse gas emissions by at least 25 per cent by 2020, from benchmark 1990 levels. Since the original judgment, a new Dutch government has pledged to reduce emissions by 49 per cent by 2030.

Urgenda has been helping Climate Case Ireland prepare for its case. Its director Marjan Minnesma believes the Dutch ruling was a significant victory that will boost similar legal initiatives elsewhere in the world, including Ireland.

Because of its international relevance, 80 per cent of the Urgenda court documents are in English and available for use by other litigants. Their action centres on a claim of “hazardous negligence” and classification of climate change as a high-risk threat to citizens. On that basis, “there is a duty of care”, and governments should do enough to protect them, says Minnesma.

Ireland’s similarities with the Netherlands are obvious: a highly developed country, using large amounts of fossil fuels over a long period, ranking among the countries with the highest per capita greenhouse gas emissions in the world.

Arguments that “we are only small” do not stand up, she adds. “That approach will not solve the [global] climate change crisis. We signed various international agreements to do our fair share.

“We won on every single point. And it was a very good explanation of the urgency of what is necessary, and that states in industrial countries should do between a 25 to 40 per cent CO2 reduction,” she notes.

“The court also said maybe 40 per cent is necessary, but in this case we only asked for 25 per cent so they didn’t make a judgment on that. But they clearly said that climate change is a very urgent problem with enormous risks, so the state should do at least the minimum.”

Urgenda argues governments – and countries – need to do more sooner, ie before 2030, to prevent serious consequences of climate change, a view that tallies with the landmark UN “1.5 degrees” report. Targets for renewable energy should be 100 per cent by 2030, given what’s facing the planet, Minnesma believes.

From an initial position of acknowledging climate change as an enormous problem but not wanting to jeopardise its industrial sector, the Dutch government has increased its emission targets, but this was combined with a “way too optimistic” reliance on “negative emissions” – taking CO2 out of the atmosphere – when the science says “it’s a theoretical concept rather than something feasible”.

Based on current commitments and the ambition of keeping the global temperature increase at 1.5 degrees, instead of 2 degrees, would require all agricultural land in the world to be planted with trees to capture carbon, she says. “That won’t happen.”

A range of actions is required, Minnesma says, and they should be implemented more quickly, such as building carbon-neutral houses; the electrification of transport, lowering maximum speeds on some roads, shutting down coal-fired power stations and deploying solar panels on every available roof.

The Dutch government appealed against the original ruling, saying it effectively meant a court was formulating government policy, but the court rejected that argument, saying judges must uphold international treaties such as the European human rights convention to which the Netherlands is a part. And it has appealed the latest decision; of the four parties in government, the largest is right-wing and “does not agree a court can make this kind of decision”.

Most politicians have not familiarised themselves with the case, Minnesma points out, though it has finally aroused public interest. Countries, meanwhile, have insisted they are behind the Paris Agreement but, “in my opinion, they don’t know what it really means”.

The Netherlands still has five large coal-fired power plants, including three new ones opened in 2015 – “when we had our first win”. Closing them would go 80 per cent of the way towards solving its emissions issue. Electricity emissions have risen since, “so we were sceptical when the government said it would work on the verdict.”

We still act as if there’s four earths, but there’s only one

On the other hand, where democracy applies and there is an independent judiciary, she has confidence in the system “because judges look at facts”. Her advice to CCI is to make it “a crowd-pleading case” so concerned citizens can become co-plaintiffs. That was how so many, especially young people, have gone every step of the way with Urgenda.

The science indicates the Earth is heading for a 4-degree rise in global temperatures, which equates to an unlivable planet. “We still act as if there’s four earths, but there’s only one.”

Dutch people – including farmers – did not believe in climate change for a very long time, but now accept extreme weather events such as the drought of 2018 (when the country had no rain for four months) were linked to global warming.

A decade ago the country devised a 100-year plan to counter sea level rise, including spending €1 billion a year on dykes. Its projection then was a sea level rise of 80 centimetres to 1.2 metres; the latest science suggests that due to melting arctic ice the worst case scenario is 2.5 to 3 metres this century.

Urgenda’s main mission is retrofitting houses to be “climate neutral”, which costs €35,000 but over time pays for itself based on monthly energy bills. This combined with improved electric mobility – ie EVs with large number of fast-charging points – has the capacity to make a major contribution to decarbonising the country, she predicts.

Its solutions focus led to them to devise an energy plan, with input from hundreds of scientists and economic analysts, on how to switch to 100 per cent renewables within 15 years. Every municipality should have nine wind turbines, each generating 3 megawatts (MW) of power, it says. There should be nine solar panels per person. It includes use of geothermal power in greenhouses and building 4,500 turbines offshore, each generating 8MW. If one entity does more, another can do less. But ultimately, “we will then have enough energy for all sectors.”

It requires the vision of US president Franklin D Roosevelt, who recognised the need for car companies to build planes during the second World War, Minnesma says.

Knowing what is happening throughout the world and solutions that work, making the transition to a decarbonised world is realisable – but there is an absence of good leaders, she says. “If the good leaders are there, we can take the window of opportunity and go for it.”