Each department to submit recycling plans by mid-June 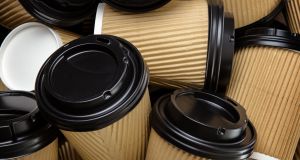 All public bodies will have to report on their recycling progress by November. Photograph: iStock

All public bodies and commercial State agencies will be required to end the purchase of single-use plastic cups, cutlery and straws from March 31st under plans due to be considered by Cabinet on Thursday.

Government departments will stop buying the single-use plastic items from this month onwards under the proposals being brought by the Minister for Climate Action Richard Bruton.

Each Government department will have to submit plans by mid-June showing how they are maximising recycling and all public bodies will have to report on progress by November.

Also at Thursday’s meeting, plans for no-deal Brexit legislation will be mapped out by the Government as preparations for a hard Brexit intensify.

The Cabinet will be briefed by the Tánaiste Simon Coveney on the political situation at Westminster and the key dates in the weeks ahead.

MPs are due to return to the debate on Mrs May’s negotiated withdrawal agreement after they return to parliament next Monday.

Ministers will discuss the Dáil schedule for the coming term and the work that is under way on the necessary pieces of no-deal legislation.

On December 11th the Cabinet decided to prioritise planning for a no-deal Brexit, in addition to planning for what they call the “central case scenario”.

On December 19th, and in line with similar actions by the European Commission, the Government published a no-deal contingency document detailing some of the work undertaken. It also committed to publish further updates and mitigating measures, complementing Commission communications, in the coming weeks.

Sources have said that since then, preparations for a “no-deal” Brexit have been intensifying across departments and agencies. This is being co-ordinated through regular meetings of Secretaries General and other officials.

Ministers will also be briefed on the expected events in Westminster in the coming weeks.

Mrs May has said she is seeking further legal reassurances from EU leaders about the permanence of the backstop agreement, which would keep the whole UK in a single customs territory with the EU until both sides agree on an alternative solution to prevent a hard border in Northern Ireland.