Sligo to retain ban on fracking in county development plan 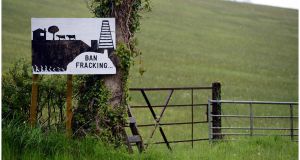 Rural fracking. Cllr Declan Bree said the ban had been welcomed by the Sligo community “who fully recognise the dangers fracking poses to water quality, to human safety and to the general environment”. Photograph: Bryan O’Brien

Sligo county councillors have unanimously voted – for a second time – to have a ban on fracking included in the county’s new development plan.

The councillors rejected a recommendation from council chief executive Ciaran Hayes that the ban, agreed last June, should be omitted from a new county development plan.

Mr Hayes said this was a situation where there was a conflict between the requirements of national government and local government.

He made the recommendation following a submission to the Draft County Development Plan 2017-2023 from the Department of Local Government suggesting that a ban on Unconventional Gas Exploration and Extraction would be “premature”.

Fracking is the extraction of natural gas by pumping high pressure water and chemicals into shale formations deep underground.

In a separate submission, David Minton, director of the Northern and Western Regional Assembly (NWRA), said the proposed ban would be ultra vires (beyond one’s legal power or authority) and should not be included.

Cllr Declan Bree (Independent) said the ban had been warmly welcomed by the community “who fully recognise the dangers fracking poses to water quality, to human safety and to the general environment”.

He said he had “half expected” a pro-fracking commercial operator to make a submission seeking to have the ban removed. “Imagine my surprise when I heard that the submission seeking the removal of the ban was made by the Northern and Western Regional Authority,” he said.

“Fortunately it is not regional assembly or the chief executive who ultimately decide what is included in our development plan – it is the elected representatives of the people of this county who will make the decision,” he added.

In his submission, Mr Hayes said the NWRA had pointed out that placing a ban on certain exploration and extraction activities in Co Sligo was “ beyond the legal powers of the county council”.

He also pointed out that at the end of October 2016 the Dáil had passed the first stage of a Bill calling for a ban on fracking in Ireland. This Bill was introduced by Sligo-Leitrim TD Tony McLoughlin.