Individual ants are certainly not smart, but their group wisdom may exceed our own 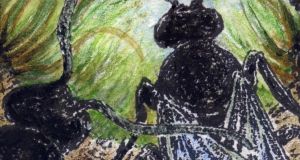 Ants do it, bees do it, horseshoe crabs in chilly seas do it . . . Not quite Noël Coward’s jaunty lyrics, but a few words prompted by the latest demonstration of nature’s unruly nuptial swarms.

One day last month, with blue skies over England’s southeast counties, the UK Met office was puzzled by an apparent rain cloud on its radar, some 50 miles across. On closer analysis, its raindrops resolved into flying insects – millions of ants from hundreds of underground colonies, impelled to stretch their newly grown wings in a whirling ascent to the sky.

The role of temperature in the timing means that cities, which generate and store extra heat, will tend to concentrate the synchrony of nuptial flights. They shelter in their parks and gardens, beneath paving and in concrete crevices, high populations of the black ant, Lasius niger, that makes up most of the flying swarms. For Dubliners, as I recall, a muggy afternoon in late July or early August can bring a sudden aerial presence – not so much of the ants themselves (though they can sometimes look thick as smoke), but of wheeling flocks of birds that are feeding on them: swifts, swallows, starlings and gulls.

By bringing together young virgin queens and males from miles away, the flying ant colonies avoid inbreeding. The males are dead within a day or two, but the queens, often mating several times with different partners, spin back to earth and cut off their wings. They have stored enough sperm to keep laying thousands of eggs underground for the next 10-20 years.

The swarming modes of nature, but particularly those of ants, have received intense scientific study by those engaged in computer modelling. In the new realm of artificial intelligence, the insects become particles in networks of maximum efficiency.

Did you know, for example, of the “travelling salesman problem” that so bedevils operations research? Nor did I, but Wikipedia puts it plainly: “Given a list of cities and the distance between each pair of cities, what is the shortest possible route that visits each city and returns to the origin city?” I would have thought you just get the map and a bit of paper and . . . well, that might work for cities (Wikipedia draws an example) but apparently not when applied to things like DNA sequencing or the optimal minimum movements of telescopes between stars.

One might then have to wrestle with research papers such as “Solving the travelling salesman problem based on the genetic simulated annealing ant colony system with particle swarm optimisation technique” by Shyi-Ming Chen and Chih-Yao Chien. The Chinese seem really into this, as in the “Ant-based swarm algorithm for charging co-ordination of electric vehicles”, a team study led by Shaoiun Xu.

How do they organise themselves for optimal avoidance of chaos?

This responded, in 2013, to an official prediction of 60 million such vehicles in China by 2030, making huge demands on the power system from intermittent, random chargings in time and space. The team’s answer to grid congestion and network failure was a “decentralised swarm intelligence technique”, drawing on “the swarm intelligence of ants”.

The ant swarms in question are not, it seems, those whirling around in the sky, in which males are searching frantically for females, but rather the everyday seething of ants marching in and out of the nest to find food, and so on. How do they organise themselves for optimal avoidance of chaos?

From a raft of relevant studies, I pick “Chaos-order transition in foraging behaviour of ants” in which two students from the Beijing University for Posts and Telecommunications joined a team at Germany’s Potsdam Institute for Climate Impact Research.

This study watched the ants, alerted to a source of food, using trail pheromones in refining the shortest path between the food and the nest. “While a single ant is certainly not smart,” said one of its German authors, Jurgen Kurths, “the collective acts in a way that I’m tempted to call intelligent.” Indeed, he believed that ants were actually more effective at organising data about their surroundings than a collective of human beings, using Google, could ever be.

“Compared to the United States, we are ants. But ants can carry 1,000 times their own weight”

One day last year, a briefing was held at Huawei’s new Cyber Security Transparency Centre in Brussels to respond to American mistrust of the company’s 5G technology. Said Sophie Batas, the centre’s director: “Compared to the United States, we are ants. But ants can carry 1,000 times their own weight.”