Barge owners afraid to make waves for fear of eviction

Body responsible for canal boating does not want boating on the canals, say liveaboards 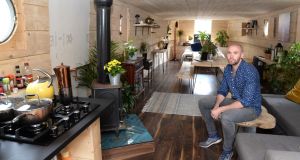 Gary Long inside his barge moored on the Grand Canal in Dublin. Photograph: Dara Mac Dónaill

The interior of Gary Long’s barge on the Grand Canal in Dublin is quite a surprise. It is panelled and floored with pale wood, the brightness in contrast to the vessel’s metallic black exterior. The kitchen table is fashioned from two planks from fallen beech trees on his family’s land in Co Limerick. His coffee table is a slab of oak, its legs plain black metal bars.

At one end of the cavernous open space is a double bed. Between the kitchen and sitting areas is a solid fuel stove which keeps Long and his dog Kimba warm in the winter. The three inches of spray foam insulation behind the timber planks helps too.

Long (34) wants to open a rooftop cafe on his barge, something he says would be an attraction to the Portobello area, where he normally moors. He paid €70,000 for the barge and got permission from Waterways Ireland to lift it into the water by crane. He brought it to Portobello where he spent about €50,000 on a fit-out, doing much of the work himself.

But all is not calm on the water. He has been told by Waterways Ireland that, as he is currently in an illegal mooring site, he is in breach of bylaws and risks his boat being confiscated.

The agency, which has authority over Ireland’s canals, says it will not comment on individual cases but notes it is bound by certain regulations.

It says it has planning permission for the existing 20 “liveaboard” moorings in Grand Canal Dock and eight more at Shannon Harbour for people who want to make boats their homes; but, beyond that, there are “no residential moorings available”. Anyone moored outside these areas is doing so illegally, it says.

As such, Long and many of his fellow liveaboards – who can regularly be seen moored along the Grand Canal at Hazelhatch, Lowtown and Sallins and on the Royal Canal at Castleknock – currently exist in an unauthorised twilight zone.

At least six liveaboards, including Long, were recently given notice by Waterways Ireland to move on or face having their boats lifted and potentially sold to recover costs. Those notices were stalled last week following the intervention of Minister of State for Heritage Malcolm Noonan, but the boat owners are still apprehensive.

Luís Gómezcala, who is moored at the 12th Lock near Castleknock, said liveaboards have always been loathe to raise their heads looking for services, for fear of being evicted.

However, he says he recently notified Waterways Ireland that he and others proposed to hire a private refuse operator to collect their domestic rubbish as well as the rubbish they pick out of the canal on their regular clean-ups.

Within four hours the authority responded, telling Gómezcala that he needed a valid residential Extended Mooring Permit to remain. It also said there are no berths available, even if he had a permit.

This tough stance is a long way from what the then chief executive of Waterways Ireland Dawn Livingstone told a Dáil committee in 2018, when she said liveaboards were “definitely part of a vibrant canal network and we can have communities that flourish”.

She said liveaboards were something that “we are keen to manage and grow in a sustainable way that meets the requirements of planning authorities”.

Long and Gómezcala insist that people who live on their vessels are very much in favour of environmental regulation and fees covering waste removal and water supplies. They say they would welcome the chance to regularise their situation and argue that properly managed moorings would be an attractive addition to city life.

Reg McCabe, a spokesman for the Inland Waterways Association of Ireland, which represents users of the country’s canals and rivers, says the case for properly controlled moorings or marinas was made years ago.

He notes Dublin City Council is about to redraft its development plan and says this is an opportunity to identify sites for marinas and draw up guidelines for how they should be environmentally managed. He says Waterways Ireland does not even need to do this itself. “They could grant a concession for the Grand Canal basin to a company in the morning,” argues McCabe.

But Long is not optimistic this will happen. “The body responsible for canal boating doesn’t seem to want boating on the canals,” he says, ruefully.