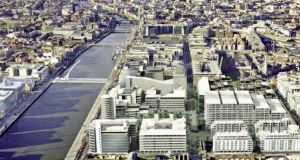 Plans for a €17 million bridge spanning the River Liffey in Dublin’s Docklands have been scuppered amid concerns over the potential impact on the shelved Dart Underground scheme.

An Bord Pleanála has refused permission to Dublin City Council to move the proposed bridge 150m further away from a site that had been intended as a station for the underground line.

The council had planned to build the pedestrian and cycle bridge connecting the old London and North Western Railway Company station on North Wall Quay to Forbes Street on Sir John Rogerson’s Quay south of the river.

The Victorian train station was the planned location of a proposed Dart Underground station for the north docks.

In mid-2016 the council deferred development of the bridge on the request of the National Transport Authority to allow a review of the Dart Underground plans.

The 7.6km rail line, which was to link Heuston Station to the Dart line, with underground stations at the north docks, Pearse Station, St Stephen’s Green, Christ Church and Heuston, was shelved by the Fine Gael-Labour government in 2011. While it re-emerged in the Transport Strategy for the Greater Dublin Area 2016-2035, the underground was not included in the 10-year National Development Plan published last year.

However, as the proposed bridge would run over the reservation strip for the line, the council decided it would be best to move it 150m to the east connecting Blood Stoney Road on the southbank with New Wapping Street on the north side.

The council last year applied to the board to change the location, submitting that the alternative bridge “can be delivered in a shorter timeframe as there would be no need to wait for the outcome of the Dart Underground review, noting that the timeframe for the review is unknown”. Building a bridge over the planned rail tunnel would be “prohibitively expensive”, it said.

If it did not go ahead with a new bridge, the existing Samuel Beckett Bridge would experience “significant pedestrian capacity issues”, the council said. It also expected a “significant proportion of cyclists” would divert onto the new bridge once built.

The board’s inspector, Gillian Kane, agreed with the council saying the location change was “necessitated by circumstances arising from the progress of the Dart Underground project”.

However, the board refused permission for the relocation. It said it believed the original location was “appropriate” owing to its position on a “clear desire line for pedestrians and cyclists between north and south of the River Liffey”.

In the longer term, the board said the Forbes Street bridge would offer the potential of a direct connection from the south of the river to a “ future Dart Underground commuter rail station” at North Wall Quay.

“The board considered that, notwithstanding the technical and cost arguments put forward in support of relocation, the existing approved position for the Forbes Street bridge would better serve the interests and amenities of the area in the long term, and would accord with the proper planning and sustainable development of the area.”

The council said it had put the project on hold.