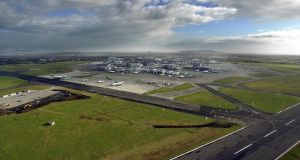 Dublin Airport Authority was last year it was granted a five-year extension to planning permission to allow it to build the north runway by 2022.

Legislation allowing noise restrictions planned for the new runway at Dublin Airport to be scrapped will be introduced to the Dáil in November, an Oireachtas Committee has heard.

The Dublin Airport Authority (DAA) was granted permission for the €320 million north runway in 2007, but construction did not get under way due to the economic downturn and subsequent fall in passenger numbers. Last year it was granted a five-year extension to allow it to build the runway by 2022.

One of the conditions of the permission capped the number of flights to and from the airport between 11pm and 7am at 65, once the new runway is functioning, to protect local residents from excessive noise.

However, since then, new European Union rules have been introduced requiring the State to appoint a noise regulator who will determine appropriate noise controls for the airport.

These rules “supersede” the original planning conditions, Minister for Transport Shane Ross told the committee, but primary legislation is required to formally establish the regulator and alter the planning consent.

Mr Ross had last year intended appointing safety watchdog the Irish Aviation Authority as noise regulator until the Attorney General advised that the body may not be sufficiently independent for the role.

“We were taken by surprise by the fact that we got legal advice which forced us to look for another authority,” Mr Ross told the committee. “We didn’t anticipate that happening, you can’t second guess the Attorney General.”

Fianna Fáil TD Robert Troy said there had been excessive delays in bringing forward the legislation which had left the DAA with a very tight time frame in which to build the new runway.

“This is not the first time you have outlined a time frame,” he said. He added that for 18 months Mr Ross had “repeatedly” told him in the Dáil that the regulator would be the Irish Aviation Authority. “How can we have confidence that what you saying to us will be delivered?”

Mr Troy was “absolutely right” that there had been a delay, Mr Ross said.

“I had anticipated an earlier timetable for the legislation,” he said, but added that he was confident the runway would be constructed within the time stipulated in the planning permission.

“I expect to have the Airport Noise Regulation Bill in the Houses by November, enacted by the end of the year, followed by the initiation of formal regulatory process and a regulatory decision by December 2020,” he said “This will align with the estimated construction of the runway by March 2021.”

The regulator would decide the appropriate balance between “the interests of the nation, the rights of the airport authority and the rights of residents,” he said.

Incoming DAA chairman Basil Geoghegan last month told the committee the airport could lose up to three million passengers if the noise restrictions attached to the original planning permission were not removed ahead of the development of the new runway.