China gets approval for human trial of vaccine; Russia to hold parade 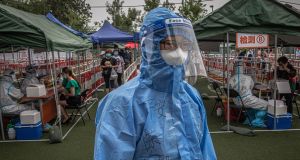 A worker wearing a full protective suit stands as people are tested for Covid-19 at a makeshift coronavirus testing centre, in Beijing on Wednesday. Photograph: EPA

Seven US states have reported their highest coronavirus patient admissions in the pandemic so far, as cases surge in the US following the easing of restrictions.

California saw record infections, too, with more than 5,000 in a single day for the first time, as Arizona, Nevada and Missouri also reported record case increases.

In Florida, Homestead hospital warned that its intensive care unit was at capacity, NBC reported. Florida confirmed 3,200 new cases on Tuesday, which marked the sixth day of more than 25,000 cases.

As Donald Trump spoke of his success in managing the pandemic – and accused Democrats of wanting to keep the economy closed so that “numbers would be bad” at a student rally in Arizona, Dr Anthony Fauci pleaded with people to wear masks in busy public spaces.

“Plan A, don’t go in a crowd. Plan B, if you do, make sure you wear a mask,” Dr Fauci said at a Congress hearing.

The next few weeks would be critical to tamping down a disturbing coronavirus surge, he said.

Dr Fauci, the head of infectious diseases at the US National Institutes of Health, and other top health officials also said they had not been asked to slow down virus testing, in contrast to Mr Trump’s claim last weekend that he had ordered fewer tests be performed because they were uncovering too many infections. Mr Trump said earlier on Tuesday that he wasn’t kidding when he made that remark, AP reported.

The US has the highest Covid-19 cases worldwide, with more than 2.3 million, or a quarter of the global total. At least 121,217 people have died in the US so far.

Brazil, with the next-highest number of infections, has 1,145,906, after it confirmed more than 39,000 in a single day on Tuesday. The death toll in Latin America’s biggest economy stands at 52,645. A judge on Tuesday ordered Brazil’s president, Jair Bolsonaro, to wear a mask in public after the right-wing populist attended political rallies without one.

The death toll in Latin America passed 100,000 on Tuesday, according to a Reuters tally, with Mexico the second-worst affected region in the nation. Mexico on Tuesday registered 6,288 new infections and 793 additional deaths, the health ministry said, bringing the totals for the country to 191,410 cases and 23,377 fatalities.

Deaths worldwide have passed 475,0000, according to Johns Hopkins University figures, with known fatalities at 476,945, and confirmed infections standing at 9,239,794. The true figures are likely to be higher due to differing testing rates and definitions, delays and suspected underreporting.

As researchers around the world work on more than 200 vaccine candidates, a Chinese pharmaceutical firm, China National Biotec Group, has won approval to run a large-scale “Phase 3” clinical trial of its novel coronavirus vaccine candidate in the United Arab Emirates, Reuters reported.

China is seeking to test potential vaccines overseas because of a lack of new patients at home.

Over a dozen experimental vaccines are being tested around the world. None of them has yet successfully completed a late-stage “Phase 3” test to determine efficacy in shielding healthy people from the virus, which has killed over 470,000 people around the world.

Such trials involve thousands of participants and normally take place in countries where the virus is widespread, so that the vaccine can be observed in a real-life environment. However China reported fewer than 10 new local cases a day on average last month, and its researchers are now looking abroad.

Other key developments in the coronavirus pandemic from around the world include:

Russia will hold a second world war parade ahead of vote on reforms on Wednesday. Putin announced the new dates for the parade and a vote extending his rule - initially planned for April – last month despite Russia still recording thousands of new cases every day. Russia has 598,878 cases, the third-highest globally and – 8,349 deaths, significantly lower than most other countries in among the 10 worst affected, according to the Johns Hopkins University tracker, which relies on official government data.

More than 200 pupils and staff who returned to a boarding school in South Africa’s impoverished Eastern Cape province this month tested positive on Tuesday, officials said. The Eastern Cape accounts for around 15 per cent of South Africa’s 101,590 cases, making it the country’s third worst-affected province.

Australia confirmed its first death in a month. The man in his 80s died in the state of Victoria, in the first coronavirus-related death in more than a month. Australia’s total death toll from the virus now stands at 103.

New Zealand recorded one new case, diagnosed in a traveller returning from abroad who remains in government-run isolation facilities. The country has reported 11 active cases, all in people returning to the country. Nine of them were diagnosed during their government-managed isolation and remain there. – Guardian