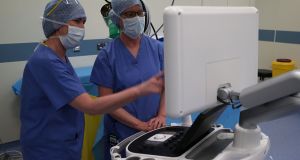 The HSE said it will provide further details on plans to launch the app alongside a promotion campaign to “support its uptake and sustained use” later this week.

A memo has been sent to Government on the state of preparedness of the technology which has been under development over the past couple of months.

It is understood that the app will be submitted formally to Google and Apple for downloading from their app stores later this week. Both companies usually take around 48 hours to approve apps for their platforms.

Subject to final Government approval, it is expected that the app will be available to the public either on Friday or early next week.

The app will help public health authorities track down potential contacts of those who have positive Covid-19 test results, using bluetooth technology to keep a log of any contacts who are considered to have been in close contact.

The contact tracing app, which has been developed by Waterford based Nearform, has been undergoing extensive testing ahead of its release, and is subject to Government approval.

However, the system will require widespread adoption to work, with other public health authorities determining that a 60 per cent adoption rate is needed for contact tracing apps to be effective.

The Irish system looks set to go ahead despite research from Trinity College Dublin that indicates the use of bluetooth technology may not be as accurate as needed, particularly on public transport or environments where there is a lot of metal, such as buses.

The HSE app uses Google and Apple’s exposure notification application programme interface, which saw the two companies collaborate to create a solution to allow Android and iOS phones to “talk” to each other, compiling a list of contacts based on beacons sent out through bluetooth that can be recorded and stored securely on any device that comes within range. To help protect privacy, the beacon includes a string of random numbers that change every 10-20 minutes and are not tied to a user’s identity.

This can happen in the background, helping to preserve battery life. The additional use of Bluetooth for exposure notification will be minor or trivial compared to other Bluetooth connections, senior engineers at Apple and Google said.

The technology, which is only available for official public health apps, uses bluetooth used to alert someone if they have been in contact with a person diagnosed with Covid-19.

The system will not replace traditional contact tracing, but is a new tool aimed at making the process easier. Public health authorities will also be able to determine what they consider exposure to be, and how many exposure events an individual has had.

Applications will not be allowed access to location services, nor will they be able to carry advertising. The apps must also connect the minimum amount of data necessary.

The exposure notification system does not turn on automatically, with users needing to explicitly give consent to enable it. Users will also have to give permission for any data, even anonymised, to leave the phones.

The two companies also pledged to disable the service, which has been designed specifically with Covid-19 measures in mind, once the pandemic has eased.

The HSE said on Wednesday that the Data Protection Impact Assessment, the source code, a product explainer and a user experience report for the app would be published “subject to final approval”.

Meanwhile, Britain said it would switch to the Apple and Google model for its Covid-19 test-and-trace app, ditching an attempt to develop an app by itself after the homegrown system did not work well enough on Apple’s iPhone, the government said on Thursday.

A smartphone app developed by the National Health Service (NHS) was initially expected to be rolled out nationwide in May but did not materialise. Health minister Matt Hancock appeared to blame Apple in part for the pivot, adding that the decentralised Google-Apple system would benefit from work done on the abortive NHS app. – Additional reporting: Reuters