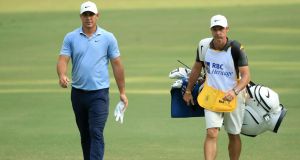 Brooks Koepka has pulled out of this week’s Travelers Championship in Connecticut after his caddie Ricky Elliott tested positive for Covid-19. Photograph: Streeter Lecka/Getty Images

Golfweek, which spoke to Koepka, said the four-times Major champion, his caddie and coach all went for additional testing after playing a practice round with Graeme McDowell, who also withdrew after his caddie, Ken Comboy, returned a positive test.

“I’m going to pull out to protect everybody else. I think it’s the right thing to do,” Koepka said. “I don’t want to risk anyone’s life if they have respiratory issues or underlying conditions. The only way this Tour can continue is if guys do this sort of thing and be proactive about it.”

The PGA Tour would not confirm Koepka’s withdrawal from the Travelers Championship but said it will issue a statement later on Wednesday.

Golfweek said McDowell’s caddie is isolating in Florida and had not travelled to Connecticut for the tournament.

“For the protection of the field, and for my own physical and mental wellbeing, I’m going to take a test tomorrow morning then jump on a private plane,” said McDowell. “I’m going to get myself out of here, home to Florida and decide whether I need to quarantine myself from my family.”

The Travelers Championship at TPC River Highlands is the third of five events on the PGA Tour’s revamped schedule which is closed to the public in a bid to help stem the spread of the virus.

American Nick Watney last week tested positive for the virus, forcing him to withdraw ahead of second-round action in South Carolina.

Cameron Champ, a two-times winner on the PGA Tour, pulled out of the Travelers Championship on Tuesday after testing positive for Covid-19.