Activists douse themselves in fake blood in climate protest 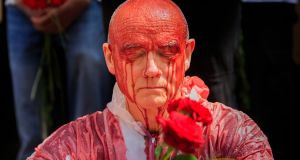 Climate activists have doused each other in fake blood outside the Leinster House to protest against Government inaction on the environment.

Extinction Rebellion protesters took to Kildare Street in Dublin on Tuesday to highlight the “climate emergency”.

Members of the group staged a demonstration where characters playing politicians poured fake blood over other people in white overalls, saying: “The blood of their children that will be on the Government’s hands.”

The group added: “The Government plan to use procedural trickery to block the Climate Emergency Bill.

“The Government are trying to kill the Climate Emergency Bill that would stop oil and gas exploration.

“This move exposes their hypocrisy on climate, they know we must leave 80 per cent of all fossil fuels in the ground yet their dance to the tune of fossil fuel companies like Exxon Mobile that are still looking for more oil and gas.”

People Before Profit TD Brid Smith is the author of the Climate Emergency Bill, which would ban the issuing of further licences for fossil fuel extraction.

The TD for Dublin South Central called on the Government to withdraw from blocking the Bill, which she said is being “held hostage by procedural trickery”.

June 11th was the date set for Amendments Stage on the opposition Bill to stop issuing new licences for oil and gas exploration off Ireland’s coast.

The Government sparked criticism recently when it invoked a parliamentary procedure to give itself a veto over the Bill.

Now, unless the Government issues a “money message”, TDs are blocked from voting on amendments or progressing the Bill.

Ms Smith said: “Time is running out, and we have 11 years to radically change our system to avoid being locked into ever more increasing atmospheric temperatures which would have catastrophic consequences for the planet and ecosystems.

“Fine Gael, despite their PR machine trying to present them as environmentally aware, are doing everything in their power — and in most cases by underhanded means — to scupper the Climate Emergency Bill which would deliver the fundamental demand of the environmental movement across the world: Keep fossil fuels in the ground.

“Fine Gael have patted the backs of the School Climate Strikers and told them how great they are and that the Government is listening.

“If ever there was an example of blatant greenwashing, this is it.”

The Department of Environment has been contacted for comment.– PA