Warnings of algal scum, danger to dogs on Lough Leane in Killarney 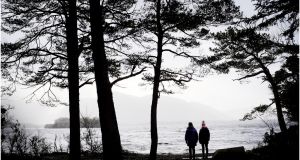 Outbreaks of blue-green “algae” occur now on an annual basis in Killarney, regardless of weather conditions, although muggy humid conditions seem to accelerate the occurrence. Above, file photograph of Lough Leane: Bryan O’Brien / The Irish Times

Signs warning of algal scum and a danger to dogs have been erected along the shores of Lough Leane, Killarney’s biggest lake, at the heart of Killarney National Park in Co Kerry.

It follows reports of the death of a dog after it was in the Deenagh River, which flows into the lake.

The pet had been healthy prior to entering the river, Mr O’Sullivan said.

While the link to the death of the dog has not been confirmed, the council on Tuesday began erecting signage .

“Following the taking of samples by council staff in recent days, laboratory tests confirmed the presence of a blue-green algae which may have the potential to form an algal scum,” the council said.

The signage along the shore of Lough Leane advises members of the public of the potential for an algal scum which can be harmful to small animals.

The warnings were “precautionary” and those who frequent the shoreline are being advised to exercise caution, the council added, warning dogs should be kept on leads and should not be allowed to enter the water.

Daily inspections of the shoreline will take place and further samples will be taken as required. “The situation is being monitored closely on an ongoing basis by Kerry County Council,” according to a spokesman.

Blue-green “algae” is not actually an algae but comprises Cyanobacteria which feed on nutrients in water.

A major outbreak of the toxic bloom in 2016 on the lake shore led to the death of a number of dogs.

Outbreaks of blue-green “algae” occur now on an annual basis in Killarney, regardless of weather conditions, although muggy humid conditions seem to accelerate the occurrence.

An indepth study 20 years ago, involving 10,000 water samples, identified euthrophication or enrichment by phosphates as responsible for the algal growth.

However the blooms continue to arise each summer.

The Environmental Protection Agency (EPA), which also monitors the lakes of Killarney said in a statement while the water quality of the lake is good, that of the Deenagh tributary is below par.

“The latest information on water quality from Lough Leane indicates that the overall the quality of the lake is good,” it added. “This assessment is based on the biological quality of the aquatic plants, phytoplankton and fish found in the lake. The concentration of total phosphorus is also good, indicating that the concentration is only slightly higher than background reference conditions.” The EPA pointed out, however, “This assessment is based on information collected throughout the lake and may not be representative of conditions in different locations.”