Higher education sector has ‘failed to make case for funding’ 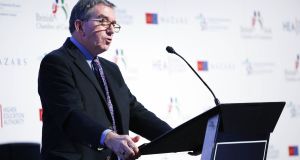 The higher education and research sector has failed to convince successive governments of the business case for investment at an adequate level, a conference organised by the British Irish Chamber of Commerce has heard.

At its second annual conference on higher education and research, the chamber called on policymakers to pursue closer ties with UK universities in order to realise Ireland’s potential to become a global research centre post-Brexit.

The UK-Ireland Higher Education and Research Partnership: The Next Steps conference, brought together leading policymakers, educators and researchers from both sides of the Irish Sea.

More than 150 attendees heard about new policy mechanisms that need to be introduced in the years ahead, including the creation of a UK-Ireland bilateral research stream and the North-South academic corridor.

Niall FitzGerald, patron of the British Irish Chamber of Commerce, announced £100 million in extra funding from the Leverhulme Trust for UK universities to bring world leaders in research from outside the UK, including from Ireland.

He said the funding would pay for 20 such joint posts with a £5 million investment in each.

“Today’s discussions give a unique opportunity to demonstrate clearly the vital role of our higher education and research sector on both islands and to make the case to government and to industry for much greater commitment to its future sustainability,” he said.

“That conversation needs data and it needs honesty. As Professor Hugh Brady, president and vice chancellor of the University of Bristol and former president of University College Dublin said when he addressed the Chamber’s members in Dublin recently: ‘the reality is that Ireland has been plagued by lip service to the importance of higher education and research for over a decade’.

“Clearly, we need to face the fact that our sector has simply not convinced successive governments of the business case for investment at an adequate level.

“There’s no point in saying the same thing over and over if our story is not having the desired effect. There lies the road to madness. Part of your challenge here today may therefore be to consider how that story has to become more persuasive.”