Why is discrimination still tolerated in our education system? 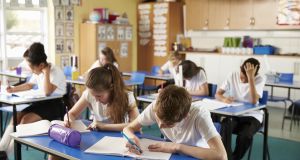 Meeting the needs of all citizens should be central to our publicly funded schools. Photograph: iStock

As the public consultation on addressing the issue of the “baptism barrier” in school admissions closes, the Department of Education is due to hold a round-table discussion on the options outlined by Minister for Education Richard Bruton to address it.

I question the notion that a school could really be inclusive if in its admissions policy can exclude children on the grounds of their religion.

Allowing the discriminatory status quo to continue sends a message that the best interests of all children is not central to our policy-making on schools.

Equate, a children and family rights organisation committed to equality, believes that a fairer, child-centred system for dealing with school admissions must be put in place.

A recent opinion piece in The Irish Times – “Schools admission idea is policy equivalent of drive-by shooting” – avoids the key issue in the school admissions policy debate: the issue of equality.

For too long equality has not been a central tenet of our education system.

The Forum on Patronage and Pluralism in 2012 called for the Equal Status Act to be amended, stating that “equitable enrolment policies are essential for achieving fairness and diversity”.

The current law impedes the Department of Education in its “duty to provide for education for all children”. There is political consensus that the law cannot remain as it is.

Groups working in Ireland towards an equal fairer society want to see change. The ISPCC, Pavee Point, the Children’s Rights Alliance, Epic, the Migrant Rights Centre and Belong To have all called for this law to be amended.

Statutory rights bodies such as the Irish Human Rights Commission and the Ombudsman for Children’s Office have submitted to the Oireachtas that the Equal Status Act should be amended in the best interests of all children.

The United Nations Committee on the Rights of the Child has called on Ireland to end religious discrimination in its school admissions policies.

And finally, the parents of Ireland want change. Independent research commissioned by Equate shows that 72 per cent of parents want the law changed so that baptism can no longer be a requirement for school admission.

This issue is not just an urban one or one of oversubscription, as has been suggested in some quarters.

The issue of equal rights has particular significance for increasingly diverse rural communities. Even one child refused a place because of their religion is discriminatory and in any other walk of life would be illegal.

Equate has been open about its objectives of increasing the number of multidenominational schools, of making the school day more inclusive and of ending religious discrimination in admissions policies. Equate has no desire to end religious education in Ireland or to target any particular religion. To suggest so demonstrates a disregard for the work we have been engaged in.

The baptism barrier was a by-product of the Equal Status Act, which was enacted fewer than 20 years ago. Faith schools of the dominant patrons in Irish education thrived before its enactment and we see no reason why its repeal would unjustly impact any minority religion.

Quite the opposite, in fact, as currently members of minority religions who do not live within a reasonable distance of a denominational school specifically attuned to their beliefs, which is the vast majority of families of minority religions as recorded in the census, are disadvantaged. This would allow fairer access for all.

The baptism barrier is not the only issue affecting our schools, but if parents did not feel pressured to baptise their children in order to access a school place – 24 per cent of parents, according to independent research commissioned by Equate – then a truer picture would begin to emerge of those who wish to access faith schools for their children.

Research carried out by Towers Watson in 2015 on behalf of the Dublin Association of Priests also showed that if the baptism barrier were removed at any point prior to 2030, the number of baptisms would fall.

To suggest that public policy should ignore the wishes of the citizens of this country as indicated in various surveys is yet another example of the lack of democratisation of Ireland’s education system.

The debate on an inclusive education system is one for all our citizens and should be constructive and civil.

Children’s rights, children’s best interests and meeting the needs of all citizens should be central to our publicly funded schools.

It is disappointing that an institution that manages 89 per cent of all primary schools refuses to acknowledge that placing barriers to education for nonreligious or children of minority religions has an impact on the children and families it purports to serve.

At Equate, we are working to convey the negative consequences of this policy of exclusion, and we will continue to represent the voices of the parents we meet and who make contact with us.