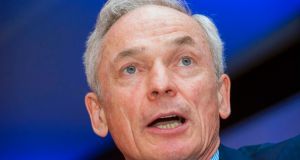 Minister for Education Richard Bruton. His spokeswoman said the department “intends to engage with the Christian Brothers on this matter”. Photograph: Daragh Mc Sweeney/Provision

The Department of Education is considering a proposal from the Christian Brothers concerning the transfer of lands worth approximately €100 million which, the department said, resembles a proposal first made by it in 2013.

Following contacts between the two sides over recent weeks, Minister for Education Richard Bruton received a letter from the Brothers in which they made an offer “very similar to the proposal originally made by former minister Ruairí Quinn”, a spokeswoman said.

Mr Quinn’s proposal was made in 2013 and would have seen approximately 200 acres, mostly playing fields associated with schools, being transferred to the Edmund Rice Schools Trust but with a proviso that half of any future sales proceeds would go to the State.

A spokeswoman for the Minister said that in March he had expressed “frustration and disappointment at the lack of progress by the religious congregations in meeting the costs of compensating victims of residential institutional child abuse.

“The Minister committed to further engagement with the religious congregations regarding outstanding monies still owed.”

The Brothers are understood to have reviewed their position over recent weeks in relation to what would happen to the proceeds of any future land sales which were shared with the State.

While the congregation’s position had been that any such proceeds should be ringfenced for use by the State for the needs of current or future generations of Irish children, it is understood it has now proposed that this would be entirely at the discretion of the Minister.

It is hoping that the resolution of the issue will see the lands, which were at one stage valued at €123 million but which are now probably worth slightly less, credited as part of the Brothers’ contribution to the €1.5 billion redress scheme for the victims of abuse in religious-run institutions.

Land sales nearing completion are expected to see the Brothers also making a further €10 million cash contribution towards the cost of the scheme in the very near future.

The Christian Brothers offered to transfer 49 school playing fields, which they proposed would be given to joint trust owned by the State and the Edmund Rice Schools Trust.

Mr Quinn made a counter-proposal for the transfer of the land to the State with guarantees of access for the schools. This was not acceptable to either the congregation or the Edmund Rice Schools Trust.

In 2013, Mr Quinn made a revised proposal that would see the land being transferred to the Edmund Rice Schools Trust but with half of any future sales proceeds going to the State. This was not acceptable to either the congregation or the trust, and the Brothers eventually, in 2015, withdrew their 2009 offer.

The Brothers are also working on the transfer of the Waterpark National School in Waterford to the department, as part of its 2002 indemnity agreement with the State. Four other congregations have also yet to complete the promised transfer of lands they own to the State under the deal.