New technological university for greater Dublin area to be announced

DIT, IT Tallaght and IT Blanchardstown will merge to form new type of university 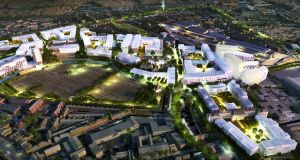 An artist’s impression of DIT’s new Grangegorman campus , which is set to become the State’s first technological university

The State’s first technological university is set to be announced later this week based on the merger of Dublin Institute of Technology (DIT), IT Tallaght and IT Blanchardstown.

Taoiseach Leo Varadkar and a number of Cabinet Ministers are due to make the announcement at an event at DIT’s new campus at Grangegorman.

The new university will be developed on three physical campuses – at Grangegorman, Blanchardstown and Tallaght – and will have a student population of about 28,500.

The three colleges have had their joint application to become a new technological university passed by an international panel to ensure it meets standards such as in relation to the qualifications of staff and the quality of research output.

The centrepiece of the university will be the Grangegorman campus, which is due to accommodate up to 10,000 students by September 2020. The students will include those currently studying in DIT buildings in Kevin Street, Rathmines and Cathal Brugha Street.

In all, 10 of the State’s 14 Institutes of Technology form part of four separate groups in Dublin, Munster, Connacht-Ulster and the southeast who are bidding to become technological universities.

The Munster bid – which includes Cork Institute of Technology and IT Tralee – is widely expected to be second in line to secure technological university status.

The idea behind the new category of technological university is to create industry-focused research institutions which are in a stronger position to attract funding and international students, as well as delivering a bigger impact regionally and nationally.

Technological universities will also be expected to continue the current role of institutions of technology in facilitating access, particularly through relationships with the further education and training sector.

A new name for the Dublin-based technological university is to be agreed in consultation with staff and students.

While the three institutes have been operating under the name “TU4Dublin”, this is just a working title.

While the three institutions have different strengths, they also share courses across areas such as business, law, arts and humanities, Stem (science, technology, engineering and maths), ICT and health and welfare.

Sources say there are no plans at present to rationalise these offerings. Instead, they will continue to be offered across the different campuses.

Legislation paving the way for the creation of technological universities was steered through the Oireachtas recently by Minister of State with responsibility for higher education Mary Mitchell O’Connor.

She said at the time the “creation of technological universities provides the opportunity to drive regional development, and provide more opportunities for individuals, enterprise and the community”.

While the creation of technological universities will be welcomed by institutions of technology and politicians, senior university sources have expressed alarm at what they say is the dilution of criteria for institutes seeking the new status.

They fear this could damage the international reputation of higher education.

The Department of Education, however, has insisted there has been no “dumbing down” of standards required for institutes of technology to secure new technological university status.