How can we solve the teacher supply crisis?

Opinion: We need more radical action instead of further discussion 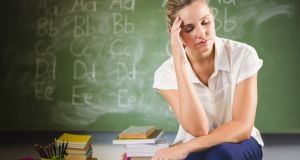 Teacher shortages are being identified across the majority of subject areas.

Minister for Education Richard Bruton has set a target for our education system to become the premier one in Europe by 2026.

This is an admirable goal and one that no doubt will capture the support and imagination of the wider public.

An essential prerequisite to achieving this objective is to ensure we have an adequate supply of highly-qualified, motivated and committed teachers.

Yet school principals at both primary and post-primary levels have been reporting significant challenges in filling teaching positions.

While historically, at post-primary level, shortages in particular subjects have occurred, the problem now appears to be more acute, with shortages being identified across the majority of subject areas.

Even when school principals can locate substitute teachers to plug a gap in a timetable, quite often the person is “out-of-field”, meaning they are not qualified to teach the particular subject required.

The problem isn’t going to go away anytime soon. This week an Oireachtas committee heard that shortages could grow even more acute due to the growing post-primary school population.

The practice of employing out-of-field teachers has been quite prevalent in some Irish schools for decades and why this problem persists is not fully clear. It certainly reflects the rather loose operationalisation of the employment structures at second-level, and the lack of real information which parents receive in relation to who is teaching their children.

In 2012, an international review panel was established to examine the structure of initial teacher education provision in Ireland. Prior to commencing its deliberations, a background report was commissioned and provided by Prof Áine Hyland, a recognised expert in the field.

The panel produced a wide-ranging report (the Sahlberg Report) which noted the rich tradition Ireland has historically enjoyed in its supply of generations of teachers.

In a prescient comment, however, the report highlighted a potential weakness in the system which has now become a reality: the issue of teacher supply.

It would appear that the urgency referred to in the Sahlberg Report was not recognised.

Another significant recommendation of the Sahlberg Report related to the “training” of teachers to master’s level. A decision to move in this direction had already been made when the then minister for education Ruairí Quinn announced in 2011, that as and from 2014, initial teacher education would be extended from one to two years for the postgraduate model (thus the former HDip Ed was to be replaced by the Professional Master of Education, [PME]).

The decision to increase the programme to two years was, in principle, a welcome one reflecting international best practice in the education of teachers to master’s level.

The suggestion that master’s level teaching could become a longer-term aspiration either as part of initial teacher education or through programmes of continuous professional development was discounted, however, and there is certainly little evidence of any serious consideration of the key implementation issues before the decision was made, in particular in relation to resourcing such a change at a time when exchequer funding was contracting.

Moving to a two-year postgraduate qualification for teaching had an immediate effect. The number who qualified as teachers following the postgraduate route in 2015 was over 1,000 less than the previous year.

Of more long-term significance is the fact that it immediately doubled the cost of securing the qualification and increased to six years the time it takes to qualify as a post-primary teacher through the postgraduate route.

It is quite clear that the issue of teacher shortages in recent years has been multi-causal and so an effective multi-faceted response is required.

The Department of Education says the Minister has taken a number of steps to address the problem: lifting the restriction on the number of days a teacher on career break can work; the provision of funding to ensure more teachers are qualified to teach through the medium of Irish; increasing the capacity on both undergraduate and postgraduate programmes with key areas such as Home Economics, Stem (Science, Technology, Engineering, Maths), Irish and foreign languages prioritised; extending the closing date this year for entry to PME courses; and encouraging retired teachers to remain eligible for employment.

These strategies will no doubt help, but are not likely to have a transformative effect. Similarly, the setting up of the specialist group on teacher supply will prove useful in the longer term. However, the mere gathering of up-to-date and accurate data will not, in and of itself, resolve the issue, as has become clear in neighbouring jurisdictions.

What needs to happen

Rather, it will provide some measure of the scale of the problem and an indication of its trajectory. There is already clear evidence that some factors are at play which are having a negative impact on teacher numbers, individually and in their interaction with each other. These factors, summarised below, require action now, rather than further discussion:

* The common basic salary scale needs to be restored. This, we feel, is an absolutely essential first step if the problem of the shortage of teachers is to be properly addressed.

* Funding should be made available to higher education institutions to grant a waiver of fees for year two PME students on successful completion of their first year. This provision should apply for the next three years at which point it can be reviewed.

* The department should make a partial refund of fees to H Dip/PME students who graduated since 2011 on completion of a specified amount of teaching service to the system within a stated duration.

* School boards of management and ETBs should be instructed to fill posts in a permanent wholetime capacity where the needs of the students, curricular requirements and enrolment in the school justify such appointments.

* The Minister should take the necessary steps in order to achieve the requirements of Junior Cycle reform, as well as ensuring the effective execution of the work of the State Examinations Commission, without impacting negatively on the teaching and learning needs of schools.

Facilitating the commission to undertake its examination work out of term would minimise the disruption to the core work of schools. The additional remuneration this would require could be partly offset by the savings generated by not having to employ substitutes. More significantly, there would a greatly reduced disruption in the service to students.

Action on the issue of teacher shortages is urgently required in order to optimise the teaching and learning process in schools nationally and influence the thinking of those considering teaching as a profession.

This is an edited version of an article which appears in the summer issue of The Leader, the quarterly journal of the National Association of Principals and Deputy Principals..