Students face being priced out of ‘luxury’ accommodation

Uninest New Mill in Newmarket, Dublin 8 is an example of the new breed of high-spec student accommodation being built in the capital. 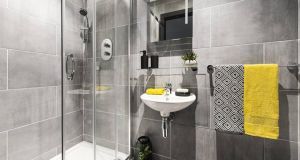 The bathroom at the Global Student Accommodation residence at New Mill, Dublin 8.

Thousands of new student beds which are coming onto the market are too expensive for Irish students and resemble deluxe boutique hotels, it has been claimed.

The Government will today release a progress report on its national student accommodation strategy, stating that almost 3,000 purpose-built student beds have been built since last year.

However, students’ unions say the bulk of new accommodation has been built by private investment firms which are targeting wealthy international students with prices of €1,000-€1,400 a month.

Many units in this new breed of luxury student accommodation are kitted out with en suite bathrooms, demister mirrors and access to communal cinemas and gyms.

Union of Students in Ireland president Síona Cahill said international students were being targeted as “cash cows” in the Irish third-level education system.

“The presumption is that international students from the US or Asia are prepared to pay a higher price, but we’re not convinced that the standard of accommodation being targeted at them is what they want or need at all.”

UCD students’ union president, Barry Murphy, said the rents for these new developments were “extortionate” and warned that many students from outside the capital would now be priced out of going to college in Dublin.

Aisling Fagan, vice-president for welfare and equality at DCU, said the new student beds would have little or no impact on the “crisis” facing students seeking a place to live in the coming academic year.

In a statement, Minister of State for Higher Education Mary Mitchell O’Connor said the Government’s target was to provide 7,000 additional bed spaces by the end of next year and 21,000 by 2024.

She said this would have long-term benefits in moderating rent levels.

In the short term, Ms Mitchell O’Connor encouraged people to consider renting a spare room to a college student and availing of the rent-a-room scheme which allows individuals earn up to €14,000 tax free.

“This would not only provide an alternative source of accommodation for students, but is also a potential income for parents and others who may have a spare room available,” she said.