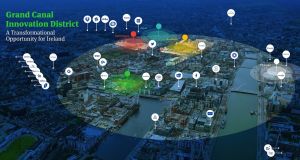 Not so long ago, tech firms and multinationals preferred to base themselves in isolated campuses on the edges of cities.

“The problem is the coffee isn’t any good there,” jokes one senior higher education figure. “Young start-ups and graduates want to be based in the city. It’s where innovation is happening.”

Coffee aside, companies are increasingly moving their research and innovation-oriented activities into the heart of cities where there is better access to talent, research institutions and tech-oriented eco-systems.

While Silicon Valley was in some ways an early version of an “innovation district”, cities such as Boston, Barcelona, New York, Philadelphia and Rotterdam have since refined the concept.

They are connecting world-class universities and large multinationals with small and ambitious start-ups in relatively small urban areas.

In the process, they are creating higher rates of job and economic growth than other areas of industrial activity.

Dublin is now seeking to join the party. The plan for the Grand Canal Innovation District is to base it around Trinity College Dublin’s proposed new €1 billion campus on Grand Canal Quay.

The 5.5 acre site at the heart of the so-called Silicon Docks – adjacent to Grand Canal Quay and Macken Street – will include a second campus dedicated to technology and innovation.

The innovation district would form part of this wider new development and provide a home for start-ups, larger firms and higher education.

For many, this is a missing jigsaw piece. While we have it all on paper – start-ups, multinationals and decent universities – we have lacked the kind of physical space for this innovation to combine.

The plan, if realised, would allow start-ups to access finance, support and expertise which are crucial to their growth and development.

Larger firms would be able to access a deep talent pool in a global environment that is increasingly competitive.

No company can master all the knowledge it needs, so relying on a network of industry collaborators appeals to global firms.

Grand Canal Dock also makes obvious sense as a location. Some of the biggest tech firms – Google, Twitter, LinkedIn, Facebook, AirBnB among them – have made the area their home. So, too, have global consultancy and legal firms such as Accenture, Deloitte and Matheson.

For Trinity, it would prove a valuable addition to its offering to students and boost its research collaboration. UCD and DCU will also play a role in supplying start-ups and expertise.

At a time when State funding for higher education is modest, to say the least, it begs the question of how all this will be funded. Trinity says the €1 billion campus will be built and financed in collaboration with industry, debt-funding entities and other sources.

Building the district is one thing: making a success of it is another.

Research shows the most successful areas don’t just co-locate activity; they create innovative ecosystems where there is genuine convergence and collaboration.

That’s why much will be focused on how to create a district that maximises collaboration and also has social elements such as bars, restaurants and cultural spaces.

The needs of the local community, too, will have to be considered, a point which Trinity’s Provost Dr Patrick Prendergast emphasised at the launch.

“Working closely with the local community, a campus of style and impact, with open spaces, ease of access and new retail spaces and services will spark further urban regeneration in the area as well as create educational and employment opportunities for all those living in close proximity to the district,” he said.