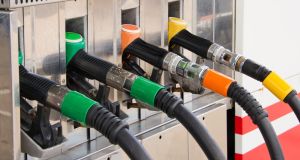 The higher-level economics paper was fair and relevant, with students tested on topical issues including the impacts of large tech corporations, Ireland’s competitiveness and carbon taxes.

Máiréad O’Sullivan of the Business Studies Teachers Association of Ireland and a teacher at Glenstal Abbey said it required plenty of knowledge and analysis from across the syllabus.

“The questions were divided into many subsections which was helpful for most students,” she said.

“However, some students commented afterwards that they were writing up until the very last second as a result of this. Normally timing is not an issue with economics but in this year’s paper it may prove to be a factor for some.”

Ray O’Loughlin, economics teacher at the Institute of Education in Dublin, said there was an even split of micro and macroeconomics on a higher-level paper that was well-received by most students. However, he said some of the detail in question one may have confused students.

Séamus Meskill, ASTI subject representative and a teacher at Scoil na Mbráithre Chríostaí in Charleville, Co Cork, said some of the questions were nicely phrased and a welcome move from overly theoretical language.

“The standout question, for me, was question eight where students were asked about the decision not to increase carbon taxes in Budget 2018, as well as Government overspending and social justice,” he said. “Students who have been paying attention to the news will have liked this.”

Mr Meskill welcomed a full question on elasticity while Ms O’Sullivan said it “would have been welcomed and dreaded in equal measure” by students.

“It was made user friendly by reference to holiday and business travellers buying airline tickets between Dublin and Dubai,” she said.

“There was a strong emphases on current topics throughout the whole paper such as electrical vehicles, the world cup rugby in Japan, the impending closure of 100 post offices next year and ‘MyCard’, a non cash card you can use in Maynooth University.”

Budget 2019 failed to increase carbon taxes. Environmentalists viewed this as a missed opportunity for the government to underline its commitment to environmental protection.

(i) Explain the terms progressive tax and regressive tax providing an example in each case.

(ii) In your opinion, did the government make the correct decision in failing to increase carbon taxes in Budget 2019? Support your answer with relevant economic information.