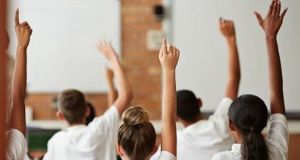 Overall, schools will receive 5 per cent more in capitation funding from September 2019 - the first increase in a decade - at a cost of just over €10 million. File photograph: Getty Images

A modest increase in school capitation funding and the creation of 1,300 new classroom posts are among the key education measures in Budget 2019.

Overall, the education budget is set to increase by 7 per cent, or almost €675 million, to a record sum of €10.8 billion next year.

Much of the new funding will go towards keeping pace with our growing school-age population in the form of new buildings, training places and teaching staff.

There is also targeted investment in performance funding for schools along with the expansion of apprenticeships and traineeships.

Overall, schools will receive 5 per cent more in capitation funding from September 2019 - the first increase in a decade - at a cost of just over €10 million.

However, it still falls short of austerity-era cuts which saw capitation funding cut per student by about €30.

Many schools complain that they are underfunded and heavily reliant on voluntary contributions and fund-raising to make ends meet.

There will also be an additional 950 special needs assistant posts and 372 teaching posts in the coming academic year to cater for the growth in students numbers.

New schools are also on the way with up to 23,000 new and replacement places.

In higher education, there is €57 million extra in additional current funding, alongside €41 million for pay deals and pensions.

The Government says this will fund 3,500 additional places in higher education and place a greater emphasis on part-time and flexible learning.

It has also pledged a new Brexit fund, or “human capital initiative”, to meet the future skills needs of the economy through new higher education places. This five-year fund due to start in 2020 will be worth about €60 million a year.

The funding will be drawn from the surplus of the national training fund, a levy on employers.

Funding is also being made available to support 7,000 apprenticeships and 5,000 traineeships to boost “earn and learn” options for school-leavers.

Overall, Minister for Education Richard Bruton said the funding package will help the country make significant progress on our “journey to becoming the best education and training service in Europe by 2026”.

“This budget is making the investments we need to ensure we equip Irish talent with the capacity to shape their future,” he said.

Minister of State for higher education Mary Mitchell O’Connor welcomed the new Brexit fund which she said will be used to meet emerging skills needs at a time of great challenges.

The response from education partners was mixed with the Irish National Teachers’ Organisation insisting that the capitation funds will have “no noticeable impact on the crisis in school funding”.

The Irish Universities Association said an extra €57 million for higher education would do little to address a growing “crisis” in the sector. “The bulk of the money is ring-fenced for specific purposes and does not deal with the core funding gap,” said Jim Miley, the association’s director general.