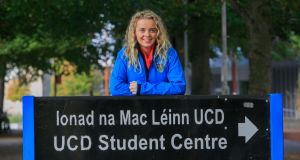 Many more Leaving Cert students who secure upgrades to their exams will be accepted on to degree courses in UCD this year on an “exceptional” basis following the Rebecca Carter ruling.

It is estimated up to 60 students will secure upgrades in their appeals this week which would make them eligible for courses at UCD.

The university had set a deadline of September 30th for students to get places on courses this year, though it is relaxing these rules on a once-off basis in the interest of “fairness” to other students.

Last month, the High Court ruled in favour of Ms Carter, from Co Wexford, who had argued she was being denied a place in her veterinary medicine course at UCD because her Leaving Cert exam marks had been totted up incorrectly. She took up her place last week.

UCD says upgraded students – who are due to receive the results of their appeals this week – will be accepted for the current academic year if there are places on courses available.

Some of its programmes still have a number of spare places such as law, social sciences, humanities, sociology, architecture, science, computers and horticulture.

In all other cases, students will be offered a deferral with a guarantee that they will have a place on their course next year, regardless of any subsequent upward movement in points.

UCD, meanwhile, says it plans to maintain its limit of September 30th next year for the admission of students who secure upgrades on foot of appeals.

The move may add to the pressure on the Department of Education and the State Examinations Commission to ensure students receive their upgrades much sooner.

In Ms Carter’s case, the High Court ruled that the appeals process was “manifestly unfit for purpose” because the results of exam marks appeals were not released until mid-October, up to six weeks after the college year starts.

Any solution to the problem is likely to involve a faster appeals process, along with colleges agreeing to admit upgraded students after a certain period of time.

Nationally, it is expected that about 400 or so students will secure higher preference courses on foot of upgrades this week.

Most of these students will be able to take up places in their colleges or universities this year as their deadlines are not as strict as UCD’s.

In practice, however, many of these students opt to defer for a year because courses are several weeks under way by the time the appeal results are released.

In a statement, UCD said it remained its position that it was not in the best interests of students to join classes after the semester had begun.

“The High Court judgement confirmed this position and that UCD was not in breach of the CAO handbook. Experience shows that their academic performance and health and welfare tend to suffer as they try to catch up on course work and acclimatise to university life,” the university said.

In relation to future years, UCD said September 30th will remain as the last day it will make offers and any student who successfully appeals their Leaving Certificate results after that date will be offered a guaranteed, deferred place for the following year’s intake.

“The university will actively engage with the Department of Education, the State Examinations Commission, the CAO and other higher education institutions to develop options that seek to ensure that the circumstances raised by the High Court case are not repeated,” it said,

“However, the university holds its position that it must retain an admissions deadline, which is in the best interests of students. The university admits circa 4,000 first year students through CAO each year and does not believe that the timing of the appeals process that can affect circa 60 students should hamper admissions for the vast bulk of students.”