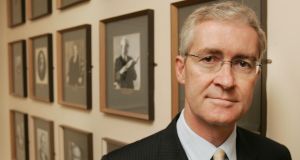 Prof Hugh Brady, vice-chancellor of the University of Bristol and a former president of UCD, says the decline of Irish universities is linked to the global financial crisis and the threat of Brexit. File photograph: Matt Kavanagh

The state of Ireland’s higher education and research system should be viewed as a national crisis, according to the head of a UK university.

Speaking in Dublin, Prof Hugh Brady, vice-chancellor of the University of Bristol and a former president of UCD, said Irish universities are significantly underfunded compared to the UK.

He warned that Irish colleges will continue to “plummet further” down global rankings unless action is taken.

The decline of Irish universities, he said, was linked to the response of the Government to the global financial crisis and the threat of Brexit.

In a speech as part of the Eversheds Sutherland Expert Policy Series hosted by the British Irish Chamber of Commerce, Prof Brady said the “political and policy responses in the UK and Ireland to these two seismic events – the crash and a looming Brexit – could not have been not been more different.”

“Relative to other sectors, the UK’s response to the global financial crisis – from a higher funding base than Ireland – was to steadfastly protect its higher education and research budgets,” he said.

“Indeed, it went even further. In 2012, the UK grasped the nettle of not only the quantum of funding required but also the balance between public and private funding of higher education through the introduction of a student loan system.

“Ireland went in the exact opposite direction – major cuts in State funding per student; an unwillingness to grasp the nettle of tuition fees or loans to fill the gap; significant erosion of its research funding base; and significant shackling of university autonomy.”

He said these “strikingly different approaches” to university funding had continued since the Brexit referendum.

“Ireland continues to sit on its hands – ignoring yet another in a long line of reports – the Cassells report – calling for investment in higher education and, if what I read in the media is accurate, almost celebrating this inaction as if it is a sensible policy response.

“The UK, in contrast, once again reaffirmed the centrality of skilled graduates, research and innovation to its economic strategy and acted accordingly.”

He said the British government had committed about £5 billion of new research funding – the majority being directed to support university-industry collaboration.

In parallel, it increased postgraduation work entitlements for international students and lifted the cap on visas for highly-skilled workers.

Prof Brady said his own university in Bristol was of similar size to UCD or Trinity but was about €100 million better off thanks to more generous funding per student and research grants.

In addition, he said, there is a wealth of research funding available through a special research infrastructure fund, as well as other sources.

“The consequences of these differences in education and research funding are plain to see.

“The Irish universities have high student:staff ratios, less small-group teaching, ageing equipment, and digital and physical infrastructure that is crying out for investment.

“Having been a magnet for top talent a decade ago, the word among international academics and Irish academics working abroad is that the Irish research environment is now significantly inferior to most major competitors,” he said.

“Furthermore, it is becoming increasingly difficult for Irish researchers to win prestigious international funding from bodies such as the European Research Council and the Wellcome Trust.”

Prof Brady said a series of urgent steps are required.

He said Fianna Fáil leader Micheál Martin’s recent proposal to establish a new department of higher education and research would help give the sector equal status at the Cabinet table.

Prof Brady said a Citizens’ Assembly could be established to consider the matter of funding, with an all-party commitment up-front to act on their recommendations. “They have done the State some service recently with another complex issue and there is no reason they couldn’t do so again.”

He said there should not be a choice between investment in Ireland’s universities and investment in its hospitals, schools or social services.

“These are false choices. It is investment in Ireland’s universities today that will ultimately drive the economy that will deliver the taxes to pay for vital public services and infrastructure over future decades.”