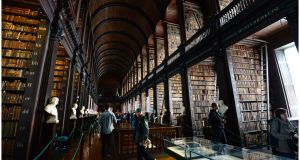 Trinity College Dublin’s Long Room is famous around the world for its stunning collection of rare library books.

The fact that all of the 40 marble sculptures which line the main chamber of the Old Library are men is a less celebrated fact.

Finally, after almost 300 years, this is about to change. Trinity provost Patrick Prendergast has called on staff and students to nominate the first female scholar to be memorialised in a bust which will sit alongside the men.

In an email to students and staff, he said it was time to make Trinity’s public spaces “more representative of our diversity”.

Mr Prendergast said nominations will be considered by a committee chaired by himself and other members of the college community.

The commissioning of the new sculpture will follow the same criteria for previous busts: the subject must have been a scholar, although not necessarily at Trinity, and be deceased.

The collection began in 1743 when the university commissioned a series of busts of prominent scholars from the sculptor Peter Scheemakers.

Today, the busts in the Long Room include writers and philosophers such as Edmund Burke, Aristotle, Isaac Newton, William Shakespeare and Jonathan Swift.

The university is seeking nominations running to less than 300 words, which include the reasons for the nomination as well as links to information relevant to the nomination. The deadline is December 1st.

The Long Room itself dates back to the 1730s. It originally had a flat plaster ceiling and shelving for books was on the lower level only, with an open gallery.

By the 1850s, these shelves had become full and a few years later the roof was raised to allow construction of the present barrel-vaulted ceiling and upper gallery bookcases.

The move to make Trinity a legal deposit library in 1801 led to a surge in the number of books that needed to be accommodated.

Under legislation, publishers in the UK and Ireland are required to send a copy of any newly published book to Trinity.

Which woman should the new sculpture be of? Here are 30 worth putting on a pedestal