Religion should be taught outside school hours, campaigners say 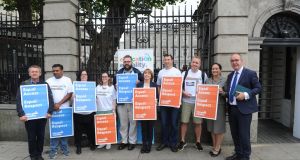 Members of Education Equality pictured with TDs Richard Boyd Barrett, Roisin Shorthall, Catherine Martin and John Lahart outside Leinster House on Wednesday, where they relaunched their petition for the removal of religious education from the school curriculum. Photograph: Aidan Crawley/The Irish Times

Religious education and faith formation should be taught outside school hours to end the “discrimination and segregation” of children of minority religions and none, campaigners have said.

Under both the Constitution and the Education Act 1998, parents have a right to have their children opt out of religion classes if they wish.

A spokesman for the Department of Education confirmed this was the case, adding that practical arrangements to accommodate children whose parents have chosen this option is “a matter for each individual school”.

However, campaigners say many of those children who opt out of religion classes have to sit at the back of the class by themselves while the religious education is carried out.

Education Equality, a lobby group calling for change have launched an online petition calling on the Minister for Education to amend the Education Act in a manner which will force schools to carry out faith formation outside of regular school hours. The petition currently has almost 3,000 signatures.

Paddy Monahan, policy officer with the group, said there was “no reason why it can’t be changed”.

“Schools are absolutely failing our children by normalising segregation. We need to uphold the rights of all children, regardless of religious faith.”

In a campaign video for Education Equality, Frank Lincoln, a parent involved in the group, said he did not think religion should be part of State education.

“It should be coming from the parents themselves to teach the children their own religious faith, not to enforce faith on little children, which I think in the end will benefit them all,” he said.

“Growing up together as a school, children should come together to learn and to learn to share will benefit them all rather than having them being segregated.”

A spokesman for the Department of Education said religion was one of seven curricular areas of the Education Act for which time would be made available during the school day.

“However, unlike other subject areas, the content of the religious curriculum provided by schools is not set by the Department of Education and Skills,” the spokesman said.

“This means that the content of the religious education programme in a particular primary school is determined by the patron of the school.”

The National Council for Curriculum and Assessment (NCCA) is currently reviewing and redeveloping the full primary curriculum, including Religion, the spokesman said.

The NCCA will publish a draft overview of a redeveloped primary curriculum towards the end of 2019.