Time to get moving on technological universities 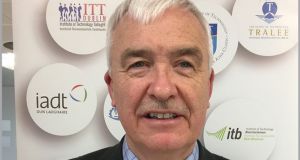 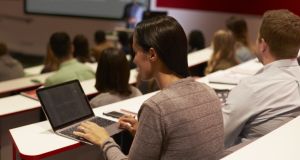 Clusters of institutes are currently collaborating with the prospect of finalising the process for designation as technological universities. Photograph: iStock

One of our key national challenges is balancing the need to support the thriving Dublin area while also investing in the sustainability of the remainder of the State.

We are experiencing a national recovery, albeit unevenly. The scale was acknowledged recently by the European Commission, which pointed to estimated GDP growth of 3.4 per cent this year and to unemployment falling to 7 per cent.

The country’s 14 institutes of technology are playing a major part in that recovery across all regions, including Dublin.

In order to give a more coherent voice to the vibrant technological sector and to consolidate the institutes’ role in promoting a more equal and prosperous Ireland, they have come together in a new organisation, the Technological Higher Education Authority (Thea). It will be launched on April 3rd by the Minister for Education, Richard Bruton TD.

The sector has demonstrated commendable resilience and flexibility during the past decade of retrenchment.

Positioned right around the country, institutes of technology have been critical to the broadening of access and to enhanced career opportunities.

They have made higher education accessible, both geographically and with respect to socio-economic profile; many who have benefited from increased access could not otherwise afford to send their children away to college, even with higher education grants.

The institutes have also acted as catalysts for the growth and sustainability of employment in their regions throughout the country.

The institutes can point to a broad scope of provision but with Stem (science, technology, engineering and maths ) at the heart. This chimes with government policy and the institutes can cite a strong return for investment and exceptionally high economic impact.

But the official support for the sector has to be set against a decrease in the state grant of 35 per cent, a drop in core staffing levels of 12 per cent, a virtual halt to capital investment and an increase in student numbers of 30 per cent between 2008-2015.

The sector has relied on increased productivity from its talented staff at a rate that is not sustainable in the longer term.

Government and official bodies are keenly aware of this position. Indeed, the HEA in its recent financial review of the institutes of technology starkly revealed how bad things are.

The Expert Group on Future Funding, chaired by Peter Cassells, was also sensitive to this situation. The title of its report, often overlooked, Investing in National Ambition: a Strategy for Funding Higher Education, should invite further reflection.

It noted that vital additional finance can come from one or a combination of three sources: the public purse, students, or enterprise.

Recent experience demonstrated that the rise of the annual student contribution to €3,000 challenged access and disproportionately impacted those who lie just above the threshold for State support.

That narrows the options considerably. When the institutes’ presidents recently met the Oireachtas committee on education, they gave its members a clear message: future funding solutions should not limit access.

The complex funding debate has overshadowed the limbo situation surrounding the Technological Universities Bill after it failed at the eleventh hour to pass into legislation. This bill provided for institutes to merge into technological universities.

Clusters of institutes are currently collaborating with the prospect of finalising the process for designation as technological universities (TUs). They believe the creation of such universities will enhance the commendable diversity that characterises the Irish higher education landscape.

The TUs will not simply represent rebranding or emerge as a factor of financial retrenchment; they will lead to further enhancement in the quality of provision in the sector.

Some institutes may elect not to pursue TU status and will continue to contribute to the diversified landscape; it is important that they are also supported in their ambitions.

Education policy has been consistent in its support for a complex weave of provision, affording students a range of pathways that can best meet their learning aptitudes and ambitions. The system has worked, and continues to work well, notwithstanding the funding challenges.

Investing in national ambition is essentially a conscious political choice. In straitened times, with many demands on scarce resources, it is almost provocative to argue for increased investment in any given area.

But there is consensus now that higher education requires additional resourcing if it is to maintain a hard-won reputation and quality provision.

Equally, if as a society we value the social cohesion and economic prosperity that are factors of the policy commitment to afford opportunity to all, then we have to consider the reality of an element of higher education that is predominantly publicly-funded, namely the technological sector.