The kids seem to be doing just fine 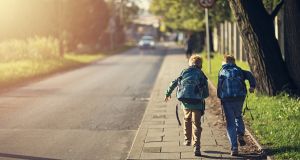 New study finds that the vast majority of nine-year-olds are not overweight or obese and have a generally good diet. Photograph: Istock

Children of today are idle, overweight, overly-protected, increasingly dependent and growing up in a troubled world dominated by screens and threatened by catastrophe.

At least that’s the gloomy picture most of us form based on a diet of often shrill media coverage on the lives of children today.

The Growing Up In Ireland survey, a longitudinal survey of Irish nine-year-olds, paints a much brighter picture.

It’s also a highly accurate snapshot because it gives us direct access to the voices of more than 7,000 children.

It finds that the vast majority of nine-year-olds are not overweight or obese and have a generally good diet; children are eating more fruit and vegetables than they did a decade ago. The proportion of children reported as “very healthy” is on the rise.

While many of us fret over the state of children’s wellbeing in a frenetic world of working parents, there do not seem to be too many flashing red lights.

Most parents report sharing a very affectionate and warm relationship with the children across all income groups as well as one- and two-parent families.

An upside of working families is that grandparents play a much bigger role in their lives.

Most children see their grandparents at least once a week and the vast majority share a close relationship with at least one grandparent.

This is also an age group that enjoys school. For the vast majority, school is somewhere they always or sometimes like to be. Most are reading for fun several times a week.

At a time of concerns over social isolation facing screen age kids, we find that most children have four or more “close friends”. This is up, slightly, on a decade ago.

So far, so encouraging – but there are areas of real concern.

While children are leading relatively healthy lives, we have a very low rate of those meeting the physical activity targets.

There is also evidence of gaping inequalities, such as poorer outcomes for children in socially-disadvantaged families.

While income levels for families are rising, they have still not returned to pre-crash levels.

Less than half of families of children born during the crash have seen their fortunes improve in recent years, but the financial circumstances of almost a sixth are getting worse.

The proportion of families enduring financial stress more than doubled from one in 10 to a quarter during the recession. Those levels have yet to return to pre-crash levels.

It’s easy to fret about a new generation who are coming of age in a very different world to our own. As far back as Aristotle, each generation has bemoaned the state of the next.

For now, at least, we can at least some solace in the fact that most of our kids seem to be doing just fine.