Construction of 18 schools delayed by setbacks in two firms

Collapse of builders Sammon behind 15 of the stalled construction projects 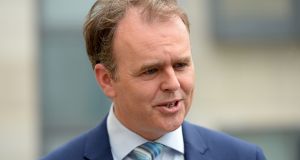 Minister for Education Joe McHugh said his department conducts several checks to assess the solvency of main contractors prior to the award of a contract on any school building project. Photograph: Dara Mac Dónaill

Construction of 18 schools countrywide has been set back this year alone because of the collapse of one company and the financial difficulties of another, latest figures show.

The Department of Education said it did not yet know the additional cost to the exchequer as a result of the setbacks. And it has not yet recovered any money from bondsmen – or guarantors – for the projects. The schools were originally expected to cost €190 million.

Kildare-based builders Sammon, which collapsed in June with the loss of 200 jobs, was behind 15 of the stalled school-building projects.

The company was involved with UK construction giant Carillion in a project to build five schools. When Carillion went bust earlier this year, that project was suspended, ultimately causing the collapse of Sammon.

Separately, McAleer and Teague, headquartered in Co Tyrone, entered a process called company voluntary arrangement, which is similar to examinership in the Republic, in May. It was supposed to build three of the stalled schools.

Five of the 18 delayed schools will have to go out to tender again.

These include Maynooth Post Primary School and Maynooth Community College, in Co Kildare. Both were supposed to be ready by next May but the completion date has been pushed back to June 2020.

In Co Cork, St Colman’s College in Midleton and Coláiste an Chraoibhín in Fermoy were supposed to be completed early last year. They won’t be ready until September next year, according to latest estimates.

Scoil Uí Mhuirí, in Dunleer, Co Louth, was due to be finished late last year, but the completion date has been rescheduled for September 2019.

Eight of the affected schools are already occupied, five of them before works have been completed.

“All these schools are compliant with all fire and safety regulations,” said a spokesman for the Department of Education.

“In the cases of Gaelscoil Bharra, Portlaoise Amalgamation, Tullamore College and Arklow Community College it is predominantly ground work and some snagging that have yet to be completed. In the case of New Ross junior and senior schools some snags and defects are still to be rectified.”

“As the final account position has not been finalised on any of these projects, it is not yet clear what the financial impact has been as a result of the delays,” said a department spokesman.

“The department is engaged with the bondsman in relation to a number of the projects. However, no money has been recovered in this regard to date. The majority of the schools already had accommodation provisions in place. Some alternative accommodation had to be sourced in a small number of cases. The costs in relation to this have not yet been finalised.”

He added: “Due diligence was carried out on both companies prior to the award of any and all contracts.”

In response to a parliamentary question last week, Minister for Education Joe McHugh said his department conducts several checks to assess the solvency of main contractors prior to the award of a contract on any school building project.

These include requests for evidence of economic and financial standing criteria in relation to turnover for the last three years.