Inquiry to be held into structural issues facing school buildings 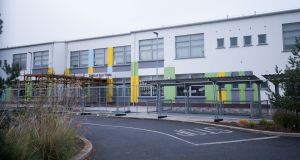 Gaelscoil Eiscir Riada, Glebe, Lucan, Co Dublin, one of the 42 schools that have undergone structural assessments in recent weeks. Photograph: Tom Honan for The Irish Times

An inquiry is to be established into why structural concerns have emerged across dozens of schools built over the last decade.

Minister for Education Joe McHugh told an Oireachtas education committee on Tuesday the review is aimed at ensuring there is no repeat of the structural issues which have dogged more than 40 schools over the past fortnight.

He also warned that contractors found to have breached building regulations could face prison or heavy fines.

Mr McHugh added that he was determined to pursue the builders of any sub-standard schools for the full cost of remedial and safety works.

“I am looking at all possible avenues to redeem costs . . . and whatever needs to be fixed as Minister, I’ll fix it. That’s my responsibility,” he said.

He confirmed that he was in discussion with his department’s legal team, the Attorney General and the Chief State Solicitor’s Office over potential legal avenues.

A total of 22 schools have required various forms of temporary remedial and safety work.

Two schools which remain closed – Tyrrelstown Educate Together and St Luke’s, which share a campus in west Dublin – are due to open on Thursday.

Mr McHugh said he was not yet in a position to say how much remedial works will cost the State, or how long such work may take.

The costs are set to rise significantly as more structural investigations are set to get under way at all 42 schools, along with permanent remediation work, over the coming months.

Mr McHugh added that the planned review will examine the department’s “rapid build” scheme and examine whether existing building regulations are robust enough to ensure the safety of new schools being built.

The review is unlikely to get under way until after remedial works have been completed on schools.

In a statement on Tuesday night, Western Building Systems said it welcomed any review and called for it to be independent of the department.

“If an inquiry is to be credible, then it must be independent of the two main contracted parties to every school building project – the department and the contractor. The role of qualified professionals who certified and project managed the schools is also a consideration,” it said.

Labour TD Joan Burton told the committee it was vital that any inquiry is headed by an independent legal representative to ensure it gets to the bottom of how these problems occurred in the first place.

We are building schools with thousands of students in them,   and hundreds of employees, and hearing there are virtually no safety checks before we put people in them

“It has caused enormous consternation and devastation in the school community . . . I was standing with teachers with tears in their eyes who have been devastated by the disruption,” she said.

Solidarity TD Ruth Coppinger said it was clear that the current building system was still not strong enough and relies on self-certification and the word of builders.

While the Department of Education has a clerk of works on all major projects since last year, the committee heard that the the clerk does not have responsibility for certifying these works.

“We are building schools with thousands of students in them, and hundreds of employees, and we’re effectively hearing that there are virtually no safety checks before we put people in them,” she said.

“We don’t have a building control unit. We just have the builder’s word that this is okay.”

Mr McHugh said the review will look at these issues and whether current regulations are strong enough.

He also confirmed that a college of further education in Whitehall will be part of the review.

This was built by Western Building Systems in 2006, but was closed in 2014 following concerns.

Mr McHugh said this building – which was built under a contract for the Office of Public Works – had not set off alarm bells because it was a significantly different type of building to the school projects.