Opinion: No sixth year group in the State's history has faced such stressful conditions 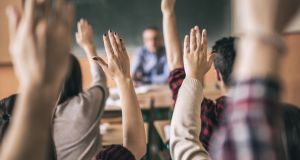 Many students feel as though they are being ignored and that their wellbeing is not being taken into account. Photograph: iStock

Many adults can identify with their nightmarish memories of the Leaving Cert as it was run under normal circumstances. Can anyone imagine how stressful it is for tens of thousands of us who are set to be forced to sit exams under-prepared and under the current strenuous conditions?

The Leaving Cert is, without a doubt, a stressful, challenging and demanding assessment. Six years of second level education culminate in one final set of exams; exams which, for many, will determine their subsequent career path.

Right now, many students feel as though they are being ignored and that their wellbeing is not being taken into account. Put simply, we feel we are on our own.

Covid-19 has forced the population of Ireland to battle an unprecedented strife. Quarantine forced all schools to shut their doors since March 12th, requiring students to study from home and resulting in the loss of almost five weeks’ of schooling, so far, at this crucial point in our final semester.

This adverse series of events has been detrimental in terms of students’ learning and ultimate results. Students are trying to complete coursework at home with, in some areas, minimal guidance from teachers.

Online classes and assignments completed from home are incomparable to face-to-face lessons completed within a secure, positive environment conducive to learning. Many students do not have access to sufficient learning resources, while countless students are exposed to hazardous domestic environments and are unable to learn properly during this time.

Many syllabi have not been finished and, now with inadequate access to learning resources and little opportunity to discuss curriculums and subjects with teachers and peers, students in said subjects will not meet the level of knowledge expected by the State Examinations Commission (SEC) and Department of Education in comparison to previous exam years.

With respect, Minister Joe McHugh’s announcement on Friday has not taken the voice of Leaving Cert students into account. The most recent survey conducted by the Irish Second Level Students’ Union concluded that, of the 46,000 students who participated in said survey, a mere 19 per cent opted for postponement of the exams as their first preference. This is clearly the minority opinion as 49 per cent of students opted for cancellation of the Leaving Cert 2020 as their first choice.

The Change.org petition, “Covid-19 Change to The Leaving Cert 2020”, has already exceeded its  goal of 15,000 signatures . The opinion held by many sixth year students across Ireland is obvious: we are in no position to sit a set of exams this coming August having been absent from a sufficient learning environment for four months. The wellbeing of students has not been fully taken into account by the department or the State Exams Commission.

The Government has not considered the situation into which Leaving Cert. students have found themselves hurled, through no fault of our own. This is an extremely traumatic and distressing time for people all over the country; many students’ families are experiencing unemployment, illness and bereavement. Unforeseen numbers of pupils will have experienced the loss of family and friends by the time the exams occur. It is impossible for anyone to concentrate on study and exams under such stressful conditions.

The postponing of the Leaving Certificate 2020 will cause students to be locked indoors for the entirety of the summer; a repeat of social isolation seeing students losing motivation which will undoubtedly negatively affect their performance and, in turn, their results.

No other sixth year group in the history of Ireland has been forced to withstand anything more than a nine-month academic school year; postponing the exams until August will mean that this year's Leaving Cert students will have worked tirelessly for 12 months straight.

The Leaving Cert is a marathon and students have trained and worked towards being in peak academic condition during the month of June; the disruption of the school year has interrupted our studies and it is unreasonable to expect students to sit exams under conditions which no other Leaving Cert year group has had to face.

The Minister’s decision impacts more than just the Leaving Cert 2020 students; families now must cancel any summer plans, many losing money and their only opportunity for a well earned rest before the next academic year starts again.

It is time to reconsider the decision to press ahead with this year’s Leaving Cert. A system of anticipated results alongside entrance/aptitude/Christmas/mock tests, like interviews or exams for each course, would be of greater benefit and would avoid a scenario in which students are dissatisfied with results, thus unable to pursue their chosen career path.

Some of the world’s greatest powers have halted end-of-school  exams for their young adults: France, the UK, the Netherlands, Hong Kong, India, among others. The department and the SEC must put aside biases based on tradition and principle and prioritise the wellbeing of Ireland’s Leaving Cert students.