‘Ants on her desk’: How some students were awarded ‘estimated grades’ 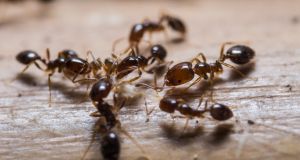 One student was awarded an ‘estimated grade’ after being distracted by ants on their desk. Photograph: iStock

Hundreds of Junior and Leaving Certificate students have been awarded grades based on estimates by their schools due to errors such as scripts being lost or candidates being given the wrong exam papers.

A breakdown of some of the reasons cited for the award of these grades, based on internal State Examinations Commission (SEC) records, is listed below.

The commission’s practice of awarding these estimated grades has not been publicly acknowledged and does not appear to be referred to in published documents.

In a statement, the commission said these awards were aimed at ensuring candidates are not disadvantaged by circumstances outside of their control, and that it has been “completely open” with individual schools and students on these matters.

Here is a list of some of the reasons cited for the awarding of these grades, based on internal records kept by the SEC:

“Alleged intimidation by another student”
(Leaving Cert English paper one)

“Sat higher-level paper one by his own error, and ordinary level paper 2”.
(Leaving Cert maths paper one)