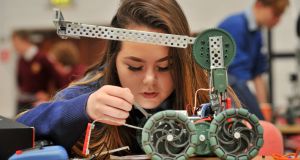 An acute shortage of teachers in key subject areas such as maths and science threatens to undermine ambitious Government plans to boost uptake of Stem subjects such as science, technology and maths.

Minister for Education Richard Bruton is due to launch a policy strategy on Monday aimed at making Ireland a “European leader” in Stem education by 2026.

However, new figures on the pipeline of teachers due to graduate over the coming years show the proportion of them who will be available to teach physics, chemistry, applied maths and other vital subjects is set to reduce to a trickle.

This, say teaching groups, is due to a combination of factors such as young graduates opting to take up jobs in other sectors of the economy, an increase in career breaks, issues such as two-tier pay, and a lack of permanent teaching posts.

The draft data – discussed at a meeting of education authorities and school managers in the past fortnight and seen by The Irish Times – indicates just a handful of physics and chemistry teachers are set to complete degree courses which prepare graduates for careers in teaching.

In addition, the proportion of students completing maths education courses at undergraduate and postgraduate level combined is set to fall this year, while there are also supply issues for Irish and European languages.

By contrast, there are significant numbers set to qualify as teachers in English and geography.

In a statement, a spokesman for Mr Bruton acknowledged that schools have reported shortages of teachers in subjects such as physics, and said the reasons were “complex”.

He added that the new Stem strategy commits to “collecting and analysing” baseline data on the availability of Stem teachers and “prioritising measures to support the supply of such teachers, if any immediate gaps are identified”.

Under the new strategy, there are plans to increase the number of female students taking Stem subjects in the Leaving Cert by 40 per cent within the next decade.

In addition, it aims to increase by 20 per cent the total number of students taking chemistry, physics, technology and engineering for the Leaving Cert.

The introduction of computer science at Leaving Cert is set to be brought forward to September 2018.

Children in primary school will also learn coding along with “creative and computational thinking” under a revised maths curriculum, while there are plans to enhance Stem teaching and assessment practices in early-years settings.

Mr Bruton said: “We are living in a rapidly changing world and key to delivering on our ambition to be the best will be the ability of our education system to adapt to a transformed economy and society.

“Our children must be equipped with the necessary analytical, creativity and critical thinking skills to thrive in such an environment.”

However, the Association of Secondary Teachers, Ireland (ASTI) warned that teacher shortages in key subjects were “extremely serious” and threatened to undermined the Minister’s Stem strategy.

“Stem is critical to future economic growth and to opening up job opportunities for thousands of young people . . . If we don’t have teachers with the appropriate skills to teach these subjects to the highest level, then I have to say we should all be very concerned,” said Moira Leydon, the ASTI’s assistant general secretary.

The National Association of Principals and Deputy Principals expressed concern that teacher shortages in these areas are causing real problems. “Some principals are at the end of their tether trying to find qualified substitutes to cover maternity leave or requests for secondment to training,” it said.