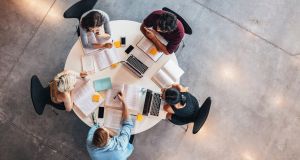 There has been a “very deliberate policy on the part of the State of increasing the number of people with doctoral education”, says the Higher Education Authority. Photograph: Getty Images

The number of people in Ireland with doctorates has doubled in the past 10 years, in line with State policy to improve the country’s research credentials.

The availability of PhD graduates is of considerable value to the country, both in terms of domestic industry and foreign direct investment (FDI).

Malcolm Byrne, head of communications at the Higher Education Authority (HEA), said there has been a “very deliberate policy on the part of the State of increasing the number of people with doctoral education.

“It’s not just that we have a talented workforce and a talented society but equally so we can say that we have the people with the ability to engage in research and innovation.”

Traditionally, those pursuing doctorates have done so with an eye toward academic careers, but now they are also heading to private industry.

While more women have third-level qualifications than men, when it comes to PhDs specifically, men outpace women, with 16,016 men and 12,743 women holding PhDs.

PhD work increases the quality of academic teaching but crucially it also bolsters research and development in industry and wider society.

In the late 1990s and into the following decade, there was significant investment in the Programme for Research in Third-Level Institutions (PRTLI).

“The higher education sector upped its research game in a big way,” said Mr Byrne. “That led to a significant growth in the number of those with PhDs and doctorates.”

However, there are concerns about future growth, particularly following deep cuts to grants for postgraduate research in recent years.

Dublin City University (DCU) president Prof Brian MacCraith said gains were made in particular through funding from agencies such as the Irish Research Council, the Health Research Board and particularly Science Foundation Ireland (SFI).

But he added: “Growth has plateaued in recent years. There has been a significant increase since 2006 [but] it has levelled off.”

Dr Ruth Freemen, director of strategy at SFI, the organisation identified as a paradigm for research funding and which currently supports 1,500 postgraduate positions, said there was pressure to increase overall numbers in the years ahead. “There is a lot of uncertainty around,” she said. “Certainly with Brexit looming, Ireland has a window of opportunity to attract very talented people.”