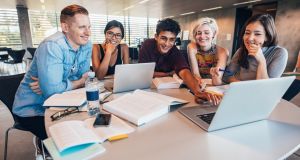 Between 2011 and 2016 the unemployment rate fell furthest for those with qualifications in engineering, manufacturing and construction, dropping from 15.7 per cent to 6 per cent. Photograph: Getty Images

Women in Ireland are better educated than their male counterparts, according to the latest data on educational participation in Ireland.

New figures released by the Central Statistics Office (CSO) on Thursday show a substantial overall increase in the level of educational achievement in the country, growing steadily over the last two and a half decades.

Today, 42 per cent of people in Ireland (1.2 million of those aged 15 and over) have third-level qualifications, a figure vastly in advance of 1991 when just 13.6 per cent could make the same claim.

The figures are among the latest set of detailed statistics mined from the 2016 Census.

The counties with the highest rates of completed third-level education were Dún Laoghaire-Rathdown (61.1 per cent), Galway city (55.2 per cent) and Dublin city and Fingal (both at 48.7 per cent).

“This report shows a continuing decline in the numbers of early school-leavers and increases in the numbers with third-level qualifications,” said Deirdre Cullen, senior statistician.

“It examines and analyses changes in these areas, as well as the relationships between the level of education completed and employment and economic status.”

Those with a third-level qualification in arts had the highest unemployment rate in 2016, at 11.6 per cent, although this was down from 17.1 per cent in 2011.

Between 2011 and 2016 the unemployment rate fell furthest for those with qualifications in engineering, manufacturing and construction, dropping from 15.7 per cent to 6 per cent.

A third-level qualification in education proved to be the most beneficial one, with the lowest rate of unemployment among graduates, standing at just 3.1 per cent last year.

The Census figures also examined the state of the Irish language in contemporary Ireland and found that 40 per cent of the population – or 1.76 million people over the age of three – said they could speak the native tongue.