Varadkar wants Irish college to be part of ‘European university’ 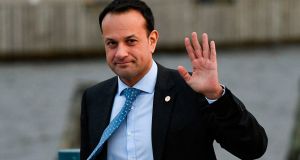 Taoiseach Leo Varadkar has said he would like a new technological university to play a part in the French president’s proposal. File photograph: Jonathan Nackstrand/AFP

Mr Macron has proposed that Europe should have at least 20 “European universities” which would allow students to move between different institutions and take classes in at least two different languages.

He says these European universities would help to “create a sense of belonging” that will be the “strongest cement for Europe”.

Speaking at the weekend, Mr Varadkar said he had a “very good discussion” about the idea with Mr Macron and other European leaders.

He added that he would like least one Irish third-level institution to form part of the new project.

“ I’m really enthusiastic about that. As you know the Institutes of Technology Bill is now going through the Dáil and Seanad, piloted by Minister Mary Mitchell O’Connor.

“[Over] the next couple of years, it’s quite probable that we’ll set up maybe one or two new universities in Ireland and I spoke to him today about how enthusiastic we would be about exploring the idea that one of the new universities could be part of that new European university.

“People can often question why you would set up a new university in Ireland – do we not have enough of them ? Actually, setting up one as our branch of a European university would make sense,” he said.

In all, 10 of the State’s 14 institutes of technology form part of four separate groups in Dublin, Munster, Connacht-Ulster and the southeast which are bidding to become technological universities.

The Dublin consortium is widely considered to be the front-runner and is likely to become a technological university in 2019.

This will involve the merger of Dublin Institute of Technology, IT Blanchardstown and IT Tallaght.

A Munster bid, which would involve the merger of Cork IT and IT Tralee, is also at an advanced stage.

Mr Macron’s proposal is based on using a network of existing universities to create a common curriculum and where students could move freely from one institution to another.

Some education experts, however, are dismissive of the idea given that Erasmus programmes already allow for student exchange.

In addition, obstacles which made it difficult for EU students to study in other member states have been removed for many years.