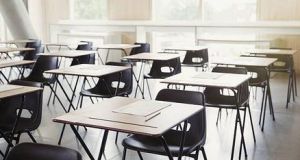 Pupils in secondary schools are increasingly being taught by unqualified staff due to a major shortage of teachers in key subject areas, a school management body has warned.

Antoinette Nic Gearailt, president of the Association of Community and Comprehensive Schools, said short-term and unexpected absences have become a “nightmare” for schools.

Trainee teachers, she said, may be required to fill urgent gaps in areas such as Irish, European languages, home economics and maths.

Speaking at the association’s annual conference in Killarney on Friday, Ms Nic Gearailt said students needed to be taught by teachers who were qualified and skilled, and have a knowledge of the curriculum.

“Last year the issue of undersupply in certain subject areas – most obviously Gaeilge, modern languages and home economics – was highlighted. The situation remains the same... a year later.

“Schools are now reporting increasing difficulties in recruiting teachers in other subjects, most notably maths, science, resource and guidance. Short-term unexpected absences have become a nightmare for schools.”

In a survey of the association’s 90 or so secondary schools this month, it found that 96 per cent reported difficulties in recruiting part-time or temporary teaching cover.

Most acute in Irish

She said planned leave, such as maternity leave, presented major difficulties across the same range of subjects.

Substitution or short-term absence was generally considered almost impossible to fill in most subjects. She said one school has three maternity positions advertised with no applicants. Another school filled a position after advertising eight times.

“And the story is the same across most schools. In effect, students are not being taught by qualified teachers.”

She part of the problem was that all this information was ad hoc and mainly anecdotal. “It does not give concrete data on the level of shortage; nor does it give an accurate idea of what the situation is likely to be next year or into the future,” she said.

Ms Nic Gearailt said short and long-term solutions must be considered such as conversion courses for existing teachers and expanding the number of concurrent teaching degree programmes to give quicker access into the profession.

“But we are also suggesting that we reconsider the position of PME [professional masters of education] students, especially those in the second year of the course. These students now spend much more time on the school premises but not in a teaching capacity.”

She said if they could be facilitated to teach a limited number of hours on a regular basis it would alleviate some of the problems around short-term absences.