What are the must-have skills for today’s graduates? 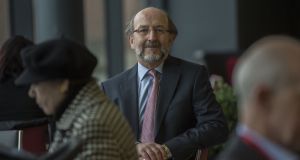 DCU president Brian MacCraith: “In this post-Brexit, Trumpian world, the most important thing we can do for this nation is talent development.” Photograph: Brenda Fitzsimons

Whenever he asks employers about the must-have skills they want in today’s graduates, Dublin City University president Brian MacCraith gets much the same answer.

“The head of one of the country’s biggest consultancy firms said to me, ‘It’s as simple as this: the first-class honours nerd is no good for us. It takes us 18 months to get any value from that person – and by then it’s probably too late.’ Employers tell us they want graduates who can solve problems, lead teams, innovate, build relationships and strengthen their organisations”.

Creative thinkers and problem-solvers have been buzzwords in education and employment circles for a while now, but MacCraith says newer traits are also in demand. Emotional intelligence is coming up more and more, he says. Digital literacy is also high on the agenda.

Still, he says if there is one attribute that looks set to grow in importance over the coming years, it boils down to this: adaptability.

“The ability to assess the world around you. To adjust to change. We know the job for life is long gone. The ability to change, and to apply thinking skills to new paradigms, is critically important.”

The pace of change is so blurry in some sectors that students start a course, only to find the landscape has fundamentally changed by the time they graduate. This poses real challenges for higher education.

To ensure Ireland remains competitive, our education system must react quickly, MacCraith says. For DCU,this means integrating these key skills into the 2,500 modules that underpin the college’s degree programmes.

MacCraith says all incoming students are now provided with an e-portfolio that acts as a digital archive of personal development framed around these key attributes.The concept, he says, is a “living degree”, which adapts to the changing environment.

For the university, it means anticipating change coming down the tracks.

One plans involves much earlier engagement with employers to see where skills trends are heading, rather than responding when it’s too late to fill gaps in the economy. Another involves crowdsourcing ideas from alumni to inform the future direction of the university. It has built a online platform (DCU Fuse) to help capture these ideas, which will feed into its upcoming strategic plan. DCU Fuse is due to be launched shortly.

To some, such a relentless focus on meeting the changing needs of big business is a slippery slope. Universities, so the argument goes, are increasingly servicing the needs of the economy rather than focusing on their role as independent centres of critical scholarship.

Against this backdrop, some critics say the very meaning of education is mutating from its original focus on human development to being a producer of human capital for the market economy.

MacCraith has heard the argument and rejects it on the basis that employers are not calling the shots over any of its courses. He cites a new DCU data analytics degree course, an area in high demand across the globe. The degree was cowritten with key companies in the sector, among them Accenture, IBM and Intel.

The course includes “industry pods”, in which industry partners will deliver domain-specific modules from their expertise area. The prospect will doubtless horrify some academics who worry that higher education is increasingly utilitarian in nature.

MacCraith, however, is unapologetic.

“When you got extremes, of course it is wrong – but that’s not what’s happening. There’s no single company asking what to put into our degree. We ask companies for advice on issues of relevance . . . We’re not changing the fundamentals of the degrees or the analytical mindsets or the understanding of the disciplines. But in terms of focus areas, we’re making sure our graduates are prepared to move straight in. That, to me, is hugely sensible.”

So, if employers benefit so much, should they contribute more to higher education?

MacCraith endorses the recommendations of last year’s Cassells report into the future of higher education funding, which calls for a greater contribution from employers as well as the State and students.

This report envisaged that business would contribute about €150 million extra to the sector through an increase in a payroll levy known as the National Training Fund. Employers have signalled a willingness to contribute more, but only if they are satisfied that any extra funding goes towards meeting their skills needs.

Politically, however, the most sensitive issue is whether students – and their families – should be asked to contribute more. MacCraith believes they should, along with the State and employers, if Ireland is serious about building a higher education system to compete with the world’s best.

An Australian-style income-contingent loan scheme for students may be the best way of delivering this, he says.

Colleges currently receive about €7,000 per student through a combination of student charges, the State contribution and other sources. A €2,000 increase, MacCraith says, it would go a long way to tackling the “funding crisis” facing higher education.

If this was split between student and the State, it would work out at €1,000 extra per student, on top of the existing €3,000 registration charge. “It won’t solve everything,he acknowledges, “but we will need proper investment if we are to run universities which can compete at a reasonably equal level internationally.”

Any funding model, he says, must address equity of access. The existing “free fees” system has not narrowed the social divide to any significant degree. An income-contingent loan system, he says, will ensure that higher education is accessible to all, with scope for an enhanced maintenance support system for less well-off students.

“A model like this would be free at the point of entry, which is very attractive for families with kids going to college at the same time. Any solution, though, will have to be strong on the issue of support for students from really challenged socioeconomic backgrounds.

One of the main arguments against an income-contingent loan system is heaping yet more debt on the shoulders of young people. Another is that debt-averse students from poorer areas will stay well away from higher education. But MacCraith says the facts don’t back up these arguments.

“Look at Australia. It didn’t happen. Those arguments don’t stack up. It’s an unusual loan – you only start paying it back when your salary crosses a sensible threshold.

“So, if your education doesn’t provide you with a job, you don’t pay at all. For that, and other reasons, that argument about being loan-averse or debt-averse doesn’t stack up. The evidence doesn’t support it.”

Most political observers say there is little chance of a minority Government delivering anything as contentious as student loans. MacCraith, however, says broad agreement could be reached on a “sensible” loans system. “It will need a political consensus, particularly across the two main political parties. There are constructive conversations taking place.

“This is about it’s about a bravery of decision-making and recognising the pre-eminent importance of talent development for the future of the nation . . . in this post-Brexit, Trumpian world, the most important thing we can do for this nation is talent development.”

It started in 1980 with just 200 students on the grounds of what was the Albert Agricultural College. Today DCU, the country’s fastest-growing university, has grown to accommodate some 17,000 students. Half of that expansion has come in the past five years alone.

It now has four campuses within a 1km radius: the original Glasnevin campus, along with its innovation campus close by on the Old Finglas Road, the All Hallows campus , and its new education campus at Drumcondra. The latter incorporates St Patrick’s College, along with the Mater Dei Institute of Education and the Church of Ireland College of Education.

There’s talk of an electric bus service linking the campuses together, while the Metro North (assuming it ever gets built) is scheduled to run across the university’s expanded footprint.

At a time of a “financial crisis” in higher education and cash-strapped colleges, how on earth can DCU managed to finance this?

Simple: through long-term loans from investment funds and the European Investment Bank.

“We’re Ireland’s university of enterprise, with a strong focus on engaging with enterprise in all forms and developing enterprising and innovative mindsets in our students,” says DCU president Brian MacCraith.

“Now, we have the first first faculty of education in a university, north or south. It creates a virtuous circle. We’re educating 21st-century educators in a research-intensive environment, with the full continuum of education taking place in one location.”

A longer-term plan, he says, is to expose students to a much broader learning experience by incorporating elements of the arts or humanities into technology, science or other disciplines.

“We want to contribute to students’ awareness of cultural capital and introduce a broader learning experience. It means we can now introduce philosophy or look at exposure to the arts, as part of a richer experience.”