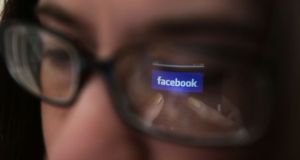 Statistics released by internet safety group Webwise to mark the EU-wide Safer Internet Day reveal the majority of more than 1,200 parents surveyed felt confident they could monitor their child’s online activity, yet only one-third felt confident of protecting them from online dangers.

A fifth of parents cited sexual exploitation as their top concern when it comes to a child’s online safety.

Paedophilic images are automatically reported to gardaí once verified, but other issues are more “nuanced” and therefore Facebook was somewhat reliant on users to self-police and report harmful posts and activities.

“We have a user base of 1.7 billion people around the world and a lot of people do report, and we rely on them to flag things for us,” said Ms Sweeney, adding that the non-consensual sharing of potentially compromising images “as a significant problem”, but encouraged parents to familiarise themselves with the web and with the resources at their disposal to help prevent such situations from happening.

Just one sixth of parents believe their child knows more about the Internet than they did, yet parents’ confidence about their ability to monitor their child’s online activity has fallen from 67 per cent in 2012 to 53 per cent now.

Other major concerns for parents were cyberbullying, accessing pornography and spending too much time online.

Webwise, funded by the Department of Education, has launched a Parenting Hub website as well as a booklet containing advice for parents experiencing difficulties controlling their child’s online behaviour.

Recommended strategies for young children who encounter pornography involve turning off the screen or closing the laptop lid. Sexting is described as not being a normal part of teenage life but “doesn’t necessarily lead to harm”.