Tánaiste Leo Varadkar says it would reflect badly on Ireland were it to be the only country Europe where schools did not re-open in September following the coronavirus pandemic. Video: Oireachtas TV 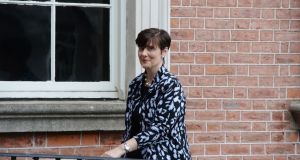 The Government intends to open schools fully at the end of August and will unveil a plan in the coming days aimed at allowing all pupils to return to class safely.

Tens of millions of euro will be made available to schools to fund structural alterations to classrooms and improve bathrooms for hand-washing, along with daily cleaning and hygiene routines, it is understood.

(Q&A: Will my child return to school full-time in autumn?)

In addition, enhanced supervision and substitution will be provided to cover an expected increase in teacher absences. This is in light of official guidance that states teachers with any symptoms should stay away from the classroom.

Taoiseach Micheál Martin is to meet Minister for Education Norma Foley on Friday morning at the Department of Education to discuss the plans. It is expected the plan will be brought to Cabinet for approval early next week and published afterwards.

Mr Martin is understood to have emphasised to Ms Foley and other Ministers that reopening schools is the Government’s single biggest priority in the coming weeks.

Privately, a number of political sources close to Mr Martin, and also those close to the other coalition parties, believe the political consequences for the Government will be ruinous if the schools fail to open for pupils five days a week.

“Nothing is more important for the Government politically,” said one high-ranking source. “Nothing.”

Dr Ronan Glynn, the State’s acting chief medical officer, said on Thursday the schools were “absolutely on track” to reopen based on how the Covid-19 infection rate had stabilised.

Detailed guidelines will be issued to schools next week with templates on safe classroom layouts and protocols for a Covid-19 outbreak.

Large quantities of hand sanitiser and personal protective equipment are being contracted centrally and will be distributed to schools.

Teachers’ unions have signalled they will support the reopening as long as it is safe and supports are in place.

Kieran Christie of the Association of Secondary Teachers Ireland said his members would abide by public health guidelines as long as there are “no attempts to cut corners”.

Separately, the Government has privately warned of potential liabilities arising from legal actions taken against the State by Leaving Cert students due to the introduction of the new predicted grades model this year.

The warning is contained in internal briefing notes released under Freedom of Information.