Learning online when school is a nine-hour drive away

On a remote farm in Australia, Donegal woman’s children enrol in School of the Air 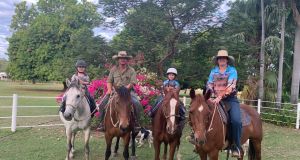 Dawn Bateman (right), her husband Chris and children Samy and Pippa are pictured at their home in the Northern Territory in Australia.

Today, Bateman and her husband, Chris, manage a 2.3 million acre farm in Australia’s Northern Territory and their children, Samy (4) and Pippa (3), are embarking on a very different educational experience.

The nearest town, Katherine, is a six-hour drive away, and the family rarely visit.

“We get all of our supplies delivered to Cape Crawford, a little roadhouse. A truck comes twice a week; on a Wednesday from the food stores and on Friday with general freight. So we get everything pretty much delivered there or via mail plane once a week. We’ve got an airstrip on the property,” Bateman says.

Samy started school this year and, like hundreds of other children living in remote areas across Australia, he is enrolled in a branch of the School of the Air (Sota). The school itself is in Mount Isa in Queensland, about a nine-hour drive away, but all of its 155 students learn remotely.

The first of these schools was set up in Alice Springs in 1951 to provide accessible education for isolated children in outback regions of Australia, initially using high-frequency radios. Today, classes are conducted online, with follow-up activities done at home with the help of parents or tutors.

For now, Samy’s classes are part-time and largely play-based.

“It’s almost like a Zoom meeting...it’s pretty fun getting a heap of four-year-olds together,” Bateman says. “It’s like mustering cats but it’s good for him to talk to other kids.”

Next year, when Pippa starts school, the couple will look into getting a tutor. “I know next year it gets a bit more serious and they have their on-air classes and they have set modules they have to complete. They have to do exams and it’s the same curriculum as the other schools. It definitely is difficult and that’s why people employ a governess, as it’s really a job in itself.”

Bateman says she goes the extra mile to make sure her children socialise despite living in a remote part of the country. “You just have to do your best and get them mixing as much as possible.”

She says many isolated children cannot participate in school sports or learn to swim as they’re so far away from any facilities. But a rural parents’ organisation has set up an annual sports camp so their kids can have that opportunity.

“They do everything; they do tennis, they do soccer, they do dance, they do gymnastics and they jam it all into a week. The kids are fried by the end of it.”

Bateman says she also takes Samy and Pippa to rodeos in the winter, which is from June to August in Australia, to socialise with other kids but many were cancelled this year due to Covid-19 restrictions.

“I didn’t think I’d miss them as much, but I most certainly did.”

Aishling Murphy moved from Wexford to Brisbane six years ago. After a few months in the city, she moved to outback Queensland and worked on a cattle station as a tutor, or governess as they are often referred to. Her role was to help the children on the property with their online education and school work.

“If there was cattle work to be done we would go out and do it and school would happen when we got back. It kind of changes around the life timetable of home,” Murphy says.

She now works as a teacher in a rural primary school, with just 16 students.

When schools across Queensland closed for five weeks in April due to the pandemic, her experience as a tutor helped her to understand the balance parents at home had to find when trying to juggle work and overseeing the education of their children.

“Most parents won’t have a background in education. I think they need to not be hard on themselves...Sometimes it just doesn’t flow,” Murphy says.

“We were very lucky in that all of our kids had laptops and the kids were quite skilled on the computers already. We use the likes of Blackboard Collaborate. It’s like Skype and all of our distance education schools would use that for web conferencing with the kids.”

Homework is sent to parents and children with explicit instructions, checking in with parents and then letting students talk to each other at the beginning of a lesson helped navigate the new way of learning.

“Kids just want to talk to each other. I would have seen it too when I was a governess and during the first five minutes of the session we just let the kids talk. They want to get that out of their systems,” Murphy says.

“[Distance learning] is a big change, so you may not get as much learning done as you would like.”