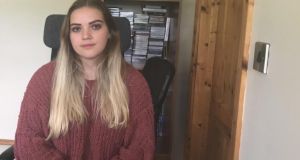 Kinga Szalaj: not eligible for predicted grades because she repeated at home for financial reasons

Kinga Szalaj sat her Leaving Cert last year.While she was happy with her results, she did not have enough points for her dream course – medicine.

The 19 year old opted to repeat the exams this year, choosing to educate herself at home for financial reasons. However, she now fears the year has gone to waste as she will be deemed ineligible for the predicted grade system introduced as a result of exams being cancelled amid the Covid-19 pandemic.

“From the guidelines, I am not eligible for calculated grades. I’m not going to get any predicted grades probably for any of my subjects at this point,” Ms Szalaj said. “I’m extremely disheartened. I worked extremely hard this year and it doesn’t matter. It feels like I wasted a year.”

Kinga watched video lessons online for four subjects she felt she needed assistance with, while the other three were completely self-taught. She decided to repeat in this manner because there was no dedicated repeat programme in the schools near her, and she could not afford private tuition.

She said the way the system had changed was “penalising people like me” and this meant she would most likely have to give up her dream of studying medicine.

“I probably won’t be able to go to college this year at all. If I do, I will have to use the points from last year for courses that I don’t really want. That was the entire reason why I repeated the Leaving Cert,” she said.

“The only option that they’re giving people like me is to take another year out. That would be two years in total, and they’re not giving us any option. I really don’t understand why they’re throwing us under the bus.”

She is not the only young person in this predicament.

Elijah Thomas Burke, who was home-schooled by family members, is also ineligible for calculated grades because he is related to his tutors.

Section 3 of the calculated grades guide issued by the Department of Education states that “in order to uphold the integrity of the process, it will not be possible, under any circumstances, to accept an estimated mark from a teacher or tutor who is closely related to the student”.

Elijah said the situation has made him feel “worthless” since he could not progress to college at the same time as his school-going peers.

“It’s quite frustrating. My plans have been completely thrown into disarray. People in the school system, they can move on with their lives and I can’t. I’ve worked hard, I’ve won achievements and now I don’t have a right to predicted grades,” he said.

“I don’t think it’s acceptable. I’ve a constitutional right to education at home and I should have a right to go to university at the same time as everybody else.”

While the criteria are clear, the two students have gone through the process of applying to the Department of Education for calculated grades.

The department said there were 920 out-of-school learners whose applications for calculated grades were currently being processed to determine their eligibility.

He is calling for a “bespoke solution” for the people in this situation, which he described as a “serious injustice”.

“These students deserve some form of opportunity,” he said. “Obviously, it’s not possible to run the Leaving Cert just for this small category, but I think there should be some sort of bespoke solution that allows the universities or the examinations commission to evaluate the ability of these students and to be able to offer them a grade on that basis.”

A spokesman for the department said the calculated grades executive office had developed a “comprehensive guide” to calculated grades for out-of-school learners that was “grounded in considerations of objectivity, fairness and equity”.

The spokesman added that despite “every effort” being made, there would be a “small number of cases” where there was “no credible evidence” to support a calculated grade in a particular subject.