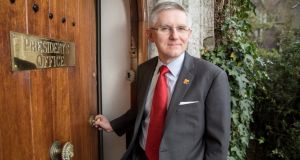 The president of University College Cork Professor Patrick O’Shea has announced that he will retire early at the end of this year for ‘personal reason’. Photograph: Tomás Tyner/UCC

The president of University College Cork Professor Patrick O’Shea has announced that he will retire early at the end of this year for “personal reasons”.

Members of the university’s governing body were informed of Prof O’Shea’s plans at a meeting on Wednesday.

He previous role was vice-president and chief research officer at the University of Maryland.

In a statement, Prof O’Shea said the college was “an extraordinary university, with amazing students, staff and alumni” and he was honoured to have served as its 15th president.

“It particularly gratifies me to note how well UCC responded to the Covid-19 epidemic,” he said.

“The crisis has brought out the best in the UCC community. We moved our operation online in a matter of days, while also deploying our resources at the front line in support of the direct healthcare response.

“The further steps we are taking will place UCC in a strong position to weather the storm and emerge as a more resilient and transformed university. I am committed to working with the governing body and my colleagues in our university management team to ensure a smooth transition to new leadership”.

At a meeting in September, the governing body will discuss the next steps in recruiting a new president for UCC.

In a statement, UCC governing body chairperson Dr Catherine Day thanked Prof O’Shea for the “outstanding contribution” he has made to the university.

She said his lifelong commitment to UCC began when he studied at the college in the 1970s.

“When he commenced his role as president in 2017, he brought huge experience of top-level university education in the United States back to Cork,” she said.

“This has helped UCC to think big and to expand its international activities both in research and in the diversity of its students. “

“On behalf of the governing body, I want to thank him for what he has helped UCC to achieve in recent years and wish him, and his family, well for the future,” she said.

The Irish Universities Association also thanked Prof O’Shea for his work for the university sector.

“It was a pleasure working with Pat when he enthusiastically chaired the IUA council in 2018. We wish him every good health and happiness following his retirement from UCC,” said Jim Miley, director general of the Irish Universities Association.

A number of academics and students have tribute to Prof O’Shea, including the husband of Adrienne Cullen, a campaigning UCC graduate who was conferred with an honorary doctorate in laws.

She died three weeks after the ceremony of cervical cancer, which was diagnosed two years late due to a series of errors at a Dutch hospital.

“Prof O’Shea will be a tremendous loss to the university,” said Peter Cluskey, Ms Cullen’s husband. “He has that rare combination, academic rigour and big-hearted humanity, which he showed to the full when he closed my late wife’s conferring ceremony with the words, ‘welcome home, Adrienne’. That meant so much to her.”