Teachers, schools and host families deprived of income as foreign students stay away 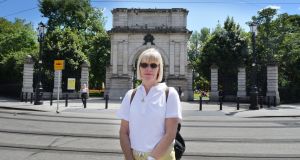 Betty Boland from Navan: has hosted foreign students for the past 20 years, but not this year due to Covid-19. Photograph: Alan Betson

At least 75,000 fewer foreign students will come to Ireland this year due to coronavirus restrictions, according to an organisation representing English language schools.

The Progressive College Network (PCN) has warned of serious knock-on consequences for jobs and a loss of income for the thousands of Irish host families who take in students every year.

Its chairman David Russell said his members and other schools are still awaiting government guidelines on how they might reopen safely in order to salvage some of the busy summer period.

“We are kind of bang in the middle of the season and so far the season hasn’t happened,” he said.

The umbrella body arrived at the 75,000 estimate, which it says is conservative, through consultation with other representative organisations on 2019 enrolments. It also believes that, based on conversations with three economists, the sector is worth over €1 billion a year to the economy.

Among the visible differences in typical Irish summer activity is the absence of groups of foreign students.

These include junior, or school-age students from European countries who typically arrive in the summer but also as early as March and as late as October. Older students who come from as far away as South and Central America – notably Brazil which has been hit badly by Covid-19 – and from Korea, arrive for longer durations, often undertaking 25-week courses.

Although these are spread out over the year, the PCN maintains that more than 55 per cent of sectoral revenues come from short-term courses of fewer than three weeks.

Mr Russell, whose NED Training Centre schools in Dublin and Limerick is one of the PCN’s eight members, said while it is difficult to find accurate figures, there are probably in the region of 40,000 host families taking in students every year.

“And it would be summer-centric; the numbers blow up during the summer with all the juniors coming from all over Europe, ” he said.

The collapse in arrival numbers is considered a threat to about 5,000 full-time and 9,000 part-time or seasonal jobs, although for now staff are receiving State Covid-19 payment supports.

All schools were instructed to close in March. Facing an uncertain future, Mr Russell said it was paramount they continued with alternative online classes for students already in the country, an approach that would allow for the renewal of visas for the coming academic year.

Mr Russell said plans by some schools not affiliated to PCN to reopen on August 10th may be premature, particularly with the ongoing absence of government guidelines on how to do so safely.

The Department of Education did not immediately respond to requests for comment on how it plans to advise or assist the sector.

“The last thing you would want is to put anybody’s health at risk and I think to open classes too soon might do that.”

Marketing English in Ireland (MEI), another representative association for English language schools with 65 members, estimates a decrease in industry revenue of about 80 per cent for the year.

“The crisis hit our industry at the worst time possible, as approximately 70 per cent of our revenue is generated during the peak season from March to September,” it said.

Over 150,000 students attend courses with English language teaching organisations in Ireland every year, according to the organisation, which estimates total value to the economy of at least €880 million.

MEI marketing manager Lorcan O’Connor Lloyd said difficulties may continue into 2021. “It’s hard to see parents having much confidence in sending their children abroad with the threat of Covid,” he said.

Host family: ‘Everybody knows there’s no students and Spain was worst-hit’

Every summer, Betty Boland goes into her porch and hangs two Spanish flags to welcome her latest arrivals.

Hers is one of about eight families in the Old Balreask Woods housing estate in Navan, Co Meath, for whom foreign language students are a routine part of summer life. But not this year.

“I didn’t get any letter [asking me to take a student], I got nothing,” she says. “But everybody knows there’s no students and Spain was hit the worst with the virus.”

Boland has been taking in kids for almost 20 years since she moved to Navan with her husband and three children. They have one spare room and take in one at a time, in July and then in August. It became a way of life – she still has the letters and presents that arrive from her former students long after they returned home.

“My daughter just said to me one day, would you take in a student? It must be 17, 18 years ago. I said no, I haven’t the time, but then I said yes and every year, every year I have a student,” she says.

She believes many young families use the money they earn from the schools – she received €450 last year for three weeks of hosting – to pay for things like books and uniforms, or other household expenses.

One of her first guests was a 12-year-old Spanish girl – she remembers her parents coming to stay in a local B&B to visit her. Over the years she took in boys and girls, all Spanish, from the ages of 12 to 17.

“I only ever took one because I only had one spare room. It was no bother, they just blend in,” she says.

“They would sit at the table and have dinner and chat away. They loved the company. I treated them like my own because if my kids were in Spain I would like them to be treated nice; I would worry about them.”

In the housing estate, the students lived close to one and other, and walked to and from school together every day. This year, it is a little more quiet outside but Boland seems to look forward to having someone in the spare room again. “Maybe next year,” she says.