Flawed school buildings to be repaired by end of the year 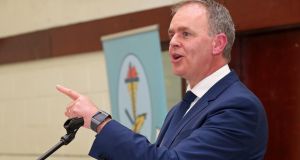 Minister for Education Joe McHugh has announced that a structural remediation programme will begin on Thursday.

Remediation works on 22 schools found to have structural flaws last year are expected to be completed by the end of the year, the Department of Education has said.

Precautionary measures were already put in place at the schools built by Western Building Systems (WBS) which found itself at the centre of a controversy over building standards.

Last year, the department said considerable amounts of money had been spent on amending the problems and that costs were due to escalate following more detailed structural investigations.

Minister for Education Joe McHugh has announced that a structural remediation programme for the schools will begin on Thursday.

Over the course of the last fortnight information sessions have been held for principals and management of the 22 schools and their patrons. Each school has been given a brief on the detail of the permanent remediation works to be carried out in their school.

“The timetabling of works and arrangements for contractors to be on site have been designed to ensure all schools can re-open as normal at the end of the summer holidays,” said Mr McHugh.

Structural remediation will commence in 14 schools initially, as and when they close for the summer holidays.

This work will roll over to the remaining eight schools. In the event that some works in some schools are not completed by the end of August, contractors will carry out the remaining work outside of school hours to prevent disruption.

“We targeted the summer holidays to get as much of the structural work done as we can, so that the precautionary measures can be removed from the schools as soon as the permanent works are completed,” said Mr McHugh.

“I am fully aware of the difficulties that this issue has caused for principals, teachers, parents and pupils as they go about their day to day business.

“I am glad that we have now reached the stage where we can implement works that will enable the schools to return to a normal school environment as quickly as possible.

“I want to sincerely thank all the schools’ patrons, the boards of management, principals and entire school communities as we work our way through this complex issue.”

The structural remediation work will be carried out by John Sisk & Son and overseen by Arup Engineers. The delivery of the programme by the Department of Education is being supported by the National Development Finance Agency.

The department said it is aiming to have as much of the works as possible completed in the 22 schools by the end of 2019.