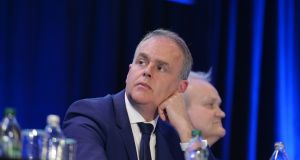 Minister for Education Joe McHugh: he said his personal view was that there was a “unique role for history in the junior cycle curriculum”. Photograph: Alan Betson

Minister for Education Joe McHugh is to consider official advice on whether history should be compulsory for junior cycle students.

The State’s advisory body on the school curriculum met on Thursday to finalise a position paper on the matter, and is due to formally contact the Minister shortly.

A draft report produced by the National Council for Curriculum and Assessment (NCCA) is understood to advise that making the subject compulsory could end up undermining junior cycle reforms.

Mr McHugh last year sought a review on whether history should be an optional subject in the junior cycle following concerns that some students might never learn about key moments in national history.

History, however, has only ever been compulsory in voluntary or religious schools, which make up just over half of secondary schools, and has been an optional subject in State or community schools.

It is understood that a draft NCCA report states that any change to the status of history would have wider implications for the junior cycle framework as a whole.

These reforms, which set out what young people’s educational experience should be in the first three years of secondary school, followed years of consultation and research.

The changes seek to provide greater autonomy for schools as well as stoking a balance between acquiring knowledge and learning skills to critically interrogate knowledge.

Some critics, however, claim that the changes may end up “dumbing down” subjects.

A spokesman for Mr McHugh said he would consider the NCCA report when he formally received it.

Mr McHugh has recently declined to say whether he will follow the advice when he is given it.

He said his personal view remained that there was a “unique role for history in the junior cycle curriculum”.

President Michael D Higgins is among those who have called for history to be made compulsory, while Prof Diarmaid Ferriter of University College Dublin said treating it as an optional subject was a “serious mistake”.