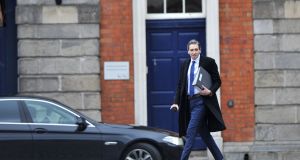 Minister for Higher Education Simon Harris TD said current legislation on higher education governance is ‘not fit for purpose and does not reflect the world in which we live’. Photograph: Dara Mac Donaill/The Irish Times

University governing bodies will be smaller and feature more external members under new legislation to be published next year, Minister for Higher Education Simon Harris has said.

He said current legislation on higher education governance is “not fit for purpose and does not reflect the world in which we live”.

Governing bodies can have as many as 40 members under the Universities Act.

Mr Harris said he plans to publish legislation early next year to replace the Higher Education Authority Act (1971) and amend the Universities Act to include stronger governance and accountability measures.

The new legislation will “respect the autonomy of the higher education institutions”, but will also give the restructured Higher Education Authority the power to “support and assist institutions if there are governance issues,” he said.

Gaps in legislation for the sector have limited the power of authority to investigate examples of misconduct in the past in a sector where more than €2 billion of public money is spent.

He said the aim of the changes was “not to impose sanctions on higher education institutions” but to enable intervention should issues of poor governance emerge.

Mr Harris was speaking at a seminar on governance in higher education hosted by the National University of Ireland (NUI) and the Irish Universities Association (IUA) on Friday.

Prof Pat Clancy, emeritus professor of sociology at University College Dublin, told the seminar that the autonomy of the Higher Education Authority had been eroded over time with “more directional intervention and expanded State control”.

The boundaries of the relationship between the authority and its governing department were problematic and there was a need to redefine these, he said.

Noting that university governing authorities had more members than the EU Commission, she said it was sometimes unclear who the governors were representing.

Dr Day expressed support for the proposed reduction in the size of governing bodies and advocated greater focus on skills.

Governing authorities, she said, needed to avoid micro-managing and focus on strategic issues and performance.

They are initially completely unfamiliar with processes, terminology and documentation used in meetings, they said.

There was an unequal power dynamic at play and far more training and induction were required if student representatives were to be empowered to play their full role.