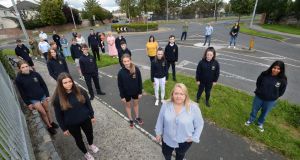 Liz Wynne of Confey College’s parents council (front) alongside children and parents from the school, pictured in Lucan, Co Dublin. They fear the private bus which transports up to 200 children to the school will be axed. Photograph: Dara Mac Dónaill/The Irish Times

Confey College in Leixlip, Co Kildare is one of several secondary schools where private bus operators say they must withdraw due to the cost of providing extra buses to comply with public health advice which limits the numbers of passengers.

In a change to public health advice just over a week ago, schoolbuses carrying second level students have been advised to operate at 50 per cent capacity.

Up to 12 buses will now be needed in order to comply with social distancing rules due to the layout of these buses, he said.

“It’s just not feasible. This is a huge problem. I know of five other schools in the greater Dublin area with private operators where there are similar problems,” he said.

While JM Coaches announced that the service would be cancelled last Thursday, it wrote to parents on Sunday afternoon to say the buses will now continue on a “temporary” basis, without social distancing.

Mr Mullally said State funding was urgently needed if they were to phase in social distancing over the coming months.

“We can’t go on indefinitely. We don’t have the resources of Bus Éireann to get extra buses. This is just a temporary measure so 200 children are able to get to school. Support for private operators is needed urgently if we are to continue operating,” he said.

Liz Wynne of Confey College parents’ council said families were reliant on the bus service and there was no alternative if it shuts.

Separately, Dublin Bus has confirmed that it has recently removed a number of school bus services that were contracted out to private operators .

In a statement, Dublin Bus confirmed it had removed these services after “careful deliberation” based on the low passenger numbers on some of these services and the availability of existing public routes.

As an alternative, it said it has increased services on these public routes.

A spokesman said all affected schools had been contacted and service levels in the bus network will be monitored over the coming months.

Additional services may be added where demand requires, subject to the approval of the National Transport Authority.

Meanwhile, Bus Éireann, which operates the Department of Education’s school transport scheme, said just 20 per cent of its secondary school bus services will be operating at the recommended 50 per cent capacity as schools reopen.

The company said it was reviewing how it will meet social distancing requirements on its 2,100 post-primary routes.

Sources say it is likely to be several months before all of the routes which service secondary schools can operate at the stipulated 50 per cent capacity.